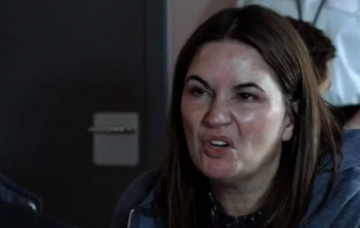 Corrie’s answer to The Fugitive, Anna Windass, gets a real shock when she receives an urgent visitation request from Eileen Grimshaw next week.

The request stuns Anna because – as we know – Eileen is married to Anna’s arch-enemy, Pat Phelan. (We should be calling her Eileen Phelan really, but it just doesn’t sound right, does it?)

Read more: There’s an extra Coronation Street on tonight and it’s an explosive one

Phelan is, of course, the very reason Anna is behind bars in the first place, following his – successful – attempt to frame her for the attempted murder of Seb Franklin.

There’s also the other small issue of Anna (accidentally) bashing Eileen’s head in with a bolt-cutter when she got caught in the crossfire between the warring pair.

So yes, to say Anna’s a bit surprised by Eileen’s request is something of an understatement.

It all starts when Seb tells Eileen that her husband is not the man she thinks he is.

But everyone’s been telling Eileen that for aaaaages and she’s not listened.

But when Eileen sees how genuinely scared the teen is – and when she makes her own startling discovery about her betrothed – she starts to worry.

Seb has slowly been seeing Phelan’s true colours after the villain showed him his gun – and is desperate to keep away from him.

He starts working with Eileen in the cab office to stay out of his way – and that’s how the truth begins to come out.

In prison, Anna tells Eileen her version of events and everything she knows about Phelan, swearing to her former neighbour that her husband is evil to the very core.

Anna’s words have an effect on Eileen and when she gets home she opens the toolbox where Pat’s been hiding the gun.

Read more: Gemma finds out the ugly truth about her Prince Charming in Corrie

Will what she finds in there be enough to convince her that Phelan is a very bad man?