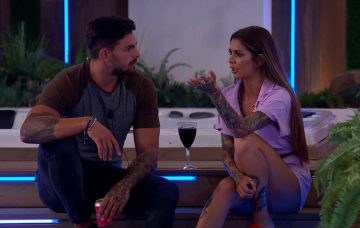 He coupled up with Darylle after Zara was dumped last week

The 22-year-old has admitted he’s missing previous partner Zara McDermott, 21, who was dumped from the island last week in a shock twist.

Although Adam seemed to move on quickly, finding a connection with Darylle at Casa Amor and coupling up with her, all isn’t as rosy at it seems.

On Thursday night’s episode, Darylle notices that Adam’s behaviour has changed ever since they moved from Casa Amor to the main villa, and he seems a bit distant and quiet.

She’s a bit miffed about it because Adam chose to bring her to the villa and now he’s ignoring her, which is awkward for her when she doesn’t really know anyone else there.

The reason? He’s thinking about Zara…

Adam confesses that although he finds Darylle hot and they got on, he can’t stop thinking about Zara.

“I’d be lying if I said there wasn’t still feelings there for Zara,” he says. “I did really like her. Honestly I thought if I went to Casa Amor and threw myself into someone I would just forget about it. But I definitely have feelings for Zara.”

Adam decides to lay his cards on the table with Darylle and says the reason he’s been acting differently is being back in the villa reminds him of Zara.

However, he insists that doesn’t mean he’s not interested in Darylle, he just needs time.

He tells her: “I just want you to know I do think you’re lovely and I’m open to getting to know you. It’s just weird right now for me. My head is a bit all over the place.”

Meanwhile, Adam and Darylle aren’t the only new couple having issues.

Dr Alex George is also finding life at the villa with Grace Wardle a bit taxing because he just doesn’t think they are clicking.

He chose to ditch previous partner Ellie Brown and couple up with Grace instead, but it seems he’s starting to doubt his decision.

Which is your favourite couple on Love Island? Leave us a comment on our Facebook page @EntertainmentDailyFix and let us know what you think!