This Morning viewers who weren't paying full attention to the show on Thursday thought a guest had let slip Holly Willoughby is pregnant again.

The moment came as the presenter and her co-host Phillip Schofield interviewed interior stylist Sophie Prescott, who is expecting. 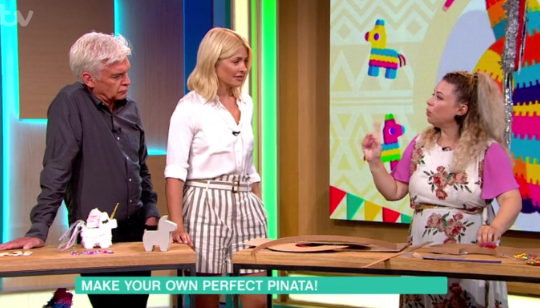 The mum-to-be was on the show to talk about how people can jazz up children's parties and baby showers with homemade pinatas.

Holly, 37, was then given the opportunity to let rip on a unicorn pinata and picked up a stick to beat it with to try and burst it open.

Did I just hear Pinata woman imply Holly is pregnant?

Phillip urged Sophie to stand back as Holly aggressively smashed the toy open, with parts of it flying across the studio. 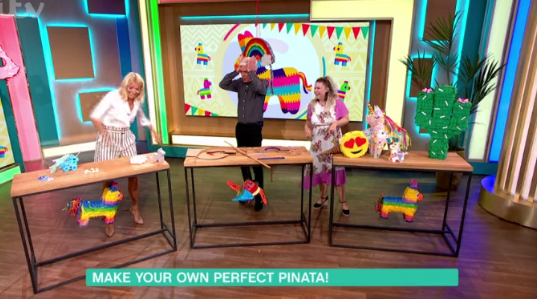 A comment Sophie made as Holly attacked one of her homemade pinatas got viewers talking (Credit: ITV)

Some viewers who had missed Holly and Phil congratulating Sophie on her pregnancy earlier misunderstood and thought she was referring to Holly, also mishearing her as saying "don't mess with the pregnant woman".

"#thismorning did that woman just say Holly was pregnant??" one asked on Twitter.

"Did they just say don’t mess with a pregnant woman? Is Holly preggo? #thismorning," said another. 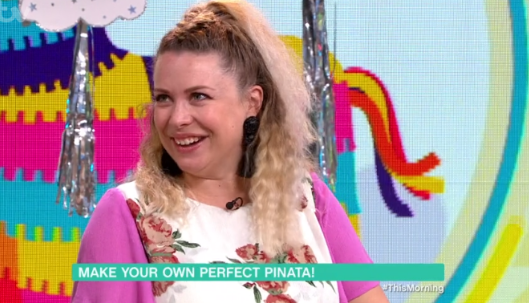 Some thought Sophie was saying Holly was pregnant, when she was actually referring to herself (Credit: ITV)

"Is Holly pregnant?! She doesn't look it. #ThisMorning," speculated a third.

Those who has been following the segment replied to say Sophie, who is due in October, was talking about herself.

"Holly is NOT pregnant, If you pay attention the pinata lady is fully pregnant and was talking about herself!" explained one.

"Holly going to town on our Unicorn Piñata. Always lots of fun with @hollywills and @Schofe  And no....everyone misheard me because of the loud banging- I said 'watch out for the pregnant woman'! Meaning me  #thismorning #pinatalady"

She admitted she often feels broody but told The Sun at the end of last year that she thinks she's "definitely done" when it comes to expanding her family.

"When you look around the table and you've got these little people you've made together who are just so funny, that's when you think, 'maybe we should have more…'

"But that's not a reason to have more! I think I'm really, definitely done. I think… Well, I'm as certain as I can be."

Do you think Holly will have a fourth baby? Leave us a comment on our Facebook page @EntertainmentDailyFix and let us know what you think!