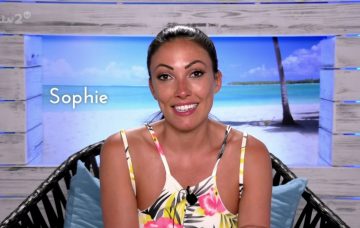 Following the devastating news of her tragic death at the age of just 32, Sophie Gradon is being remembered by Love Island fans and stars in the best way, as host Caroline Flack and voice over Iain Stirling share what they believe to be her greatest on-screen moment.

Sharing a clip of her Miss Love Island pageant speech on Twitter, Iain wrote: “This will forever remain one fo my favourite Love Island moments. Dearest Sophie, I truly hope you are now at peace. Stay shapey.”

Standing up for co-star Zara Holland, whose Miss Great Britain title was taken away from her after she performed a sexual act on the show, Islanders and fans alike were in tears at Sophie’s brave, inspirational and trail-blazing words.

She began: “Life shouldn’t be about judging each other. For example, judging a young woman for enjoying herself.

“A young woman who hasn’t harmed anyone, but a woman who has faced a torrent of judgmental and close-minded opinions since leaving Love Island.”

As her fellow contestants, especially the boys, looked on in amazement, Sophie ended her speech with an empowering message for women.

She added: “As an ex Miss Newcastle, and a Miss Great Britain, I can say it’s time people move forward from old-fashioned thinking, and accepted the simple fact that women like to have sex!”

Celebrating her message, Sophie threw her arms up into the air, while her co-stars whooped and cheered.

Caroline Flack, whose own love life has undergone a lot of scrutiny in the public eye, followed Iain in celebrating Sophie, reposting the video and writing: “Ditto”.

Caroline was one of the first to publicly send out a message following Sophie’s untimely death, tweeting: “So very sad…such a beautiful soul…such a beautiful smile. Thoughts and love with friends and family @sophiegradon.”

Geordie Sophie was a much-loved contestant of the dating show in 2016, where she famously shared a tumultous relationship with Welsh contestant Thomas Powell.

The former Miss Newcastle also paved the was for LGBT couples on the show, by being the first contestant to partner up with newcomer Katie Salmon.

Her former co-stars have also been posted tributes to the model, describing her as ‘a beautiful, smiley, loving girl’.

Sophie’s Love Island ex Tom also reposted a poignant tweet written by Sophie, adding, “Always had a way with words. You will be dearly missed by so many.”

Sophie’s tweet read, “I truly believe that when true and honest souls get taken away from us, they are the ones who have found the meaning of life.”

Sophie passed away at her home on Wednesday, and a spokesperson for Northumbria police said: “There are not said to be any suspicious circumstances surrounding her death.”

If you are struggling with depression or suicidal ideation, contact Samaritans for support and guidance; call 116 123. Samaritans: https://www.samaritans.org/how-we-can-help-you