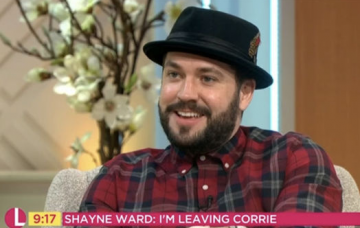 Shayne Ward’s biggest fan tuned in to see his appearance on today’s Lorraine – his daughter Willow!

In the snap shared by her mother and Shayne’s fiancée, Sophie Austin, the one-year-old can be seen sitting as close to the TV as she can get to see her dad being interviewed about his upcoming Coronation Street exit. 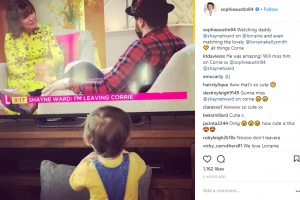 The Hollyoaks actress commented on her little girl matching Lorraine Kelly’s outfit as she wrote beside the cute picture: “Watching daddy @shaynetward on @lorraine and even matching the lovely @lorrainekellysmith”

Sophie’s fans were touched by the snap with one writing: “Aww that’s so cute.”

Another agreed commenting: “Omg how cute is this,” while a third said: “Awww, that’s so adorable!”

A fourth wrote: “Will miss you on Corrie @shaynetward , but I expect you’re looking forward to spending time with your little Willow, but please hurry back to our screens, sending love.”

Shayne and Sophie started dating in early 2016 and welcomed Willow the following December.

The couple are now planning their wedding after the Coronation Street star popped the question on Boxing Day last year.

The 33-year-old told OK! magazine their relationship has been amazing, if not traditional.

He said: “We never really dated – that’s what’s mental. Everything sort of happened naturally. We’ve done everything backwards. We got together, had a baby and now we’re getting married.

“I feel like I’ve known Sophie for a lifetime. It was meant to happen. Sophie and Willow complete me.”

Shayne appeared on today’s Lorraine to talk about his forthcoming exit from Corrie, after playing Aidan Connor for the last three years.

The star couldn’t give too much away of the exit storyline but said: “You’ve got to look at everything that Aidan’s been through and that he’s a troubled soul.

“He keeps trying to prove himself to his dad and his family but things keep going wrong for him.”

Shayne has already filmed his final scenes and said he was delighted that was followed by the biggest leaving party Corrie have ever done.

“It was great, the turnout of people that came. I’ve been there for three years and it was only meant to be six months,” the former X Factor champ revealed.

He added that he will really miss all his friends on the show.

Speaking about what’s next for him, Shayne told the Daily Star Sunday: “I’ve had a few great meetings with some casting directors.

“I want to do something where serious acting is involved. Corrie has been amazing because I’ve been acting day in, day out for three years.”

How do you think Shayne’s character Aidan will be written out of Corrie? Leave us a comment on our Facebook page @EntertainmentDailyFix and let us know what you think!