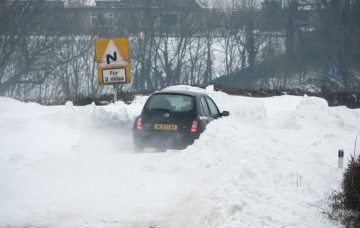 Set to be the coldest winter on record

The Met Office has warned that January is set to be one of the coldest on record in the UK.

Forecasters predict that freezing winds from Iceland will cause temperatures to plummet across Britain – and the -9C icy blasts will cause chaos across the country and could endanger the vulnerable.

British residents should dig out their thermals and stock up on warming soups as the weather threatens to make lives very uncomfortable.

After an unseasonably warm December in some parts of the country, northern and central England will now face freezing fogs with risks of snow and icy frosts.

There will be widespread lows of -5C to -7C across England by the weekend, with a ‘feels-like’ factor of -10C.

In some places, temperatures have already dipped to -9C at night.

While most of us are able to plan ahead and hunker down in front of a cosy fireplace, this weather can be worrying for the elderly, sick and young.

Public Health England and the Met Office have issued a level 2 health warning for the vulnerable.

Forecaster Helen Roberts told The Sun: “Temperatures in the north will struggle to get much above freezing.

“Elsewhere they will hover in single figures through the week.”

According to the official reports, temperatures are set to nosedive over the coming days bringing harsh frosts, freezing fog and even a risk of heavy snow.

Helen added: “There will be freezing fog in some areas, but not too widespread or thick.

“It should be shallow, patchy and localised, especially around areas like the Welsh Marches and southwest England.”

According to experts, the new “Beast from the East” could start a three-month deep freeze across large parts of the country with a “higher than usual” chance of ice in January.

Earlier this week, the Met Office said that “severe gales are possible” throughout January and the month is likely to be “unsettled”.

Morning!
A shivering -11C recorded at Braemar earlier, making it the coldest morning of the #winter so far.
Widespread frost to start the day for parts of NE Scot, S Wales, Devon, Cornwall and around the Scot/Eng border. Just about frost-free elsewhere.
Matt pic.twitter.com/dCFHIxI1Ov

And forecasters have warned that the phenomenon called “Sudden Stratospheric Warming” is poised to cause chaos throughout January.

Bus and train services, as well as flights, could also be disrupted.

Meanwhile, bookies Coral has placed odds on at 4/5 that this winter will be the coldest on record following the scorching summer the UK experienced.

Do you prefer summer or winter? Leave us a comment on our Facebook page @EntertainmentDailyFix and let us know what you think!