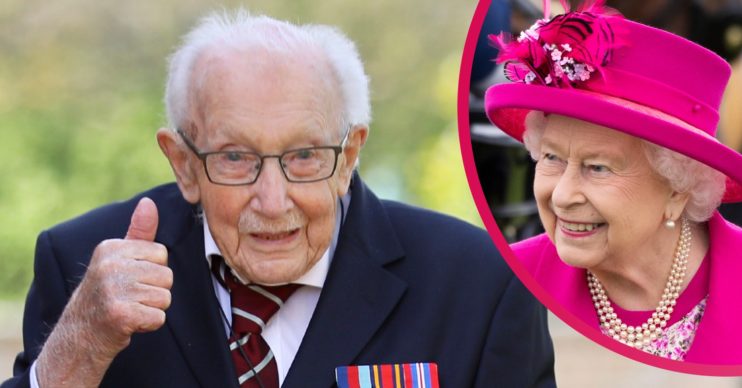 The most "special" of days

Hero fundraiser Sir Tom Moore has been knighted in a ceremony at Windsor Castle.

He was accompanied by his daughter and son in law Hannah and Colin, as well as his grandchildren.

Addressing fans ahead of the ceremony, Sir Tom said on Twitter that he “never could have imagined” that he would ever receive such a “huge honour”.

He also revealed he was “very much looking forward” to meeting The Queen, and said it would be one of “the most special of days”.

A tweet on his official account shared the message: “I could never have imagined this would happen to me. It is such a huge honour and I am very much looking forward to meeting Her Majesty The Queen.

“It is going to be the most special of days for me.”

Other investitures were reportedly due to take place at Buckingham Palace, in London, and the Royal Family’s Palace of Holyroodhouse, in Edinburgh, in June and July.

But while those ceremonies were postponed, an exception was made for Sir Tom to receive his honour.

According to Buckingham Palace, it is the first time the new “unique” format of the traditional ceremony has ever taken place.

It insisted that the event would would be undertaken with strict social distancing measures.

As reported by ITV, the Queen planned to use her father King George VI’s sword while presenting Sir Tom with the Knight Bachelor insignia.

Sir Tom, who turned 100 last month, is a veteran of the Second World War.

He won the hearts of the nation during the lockdown by raising close to £33 million to support health service charities.

People donated cash as he walked laps of the garden at his home in Bedfordshire.

Earlier this week, the hero had his own sculpture unveiled – a bust showing Colonel Moore in his signature blazer and glasses.

Garry McBride of Monumental Icons, who commissioned the work, said he hopes it will be put on display at the NHS Charities Together headquarters.

Motivated by Tom Moore’s incredible NHS fundraising efforts, he says the commission gave him something worthwhile to do during lockdown.

He told the Daily Mail: “I was in a fortunate position, being in the monument and sculpture business, and my sculptor, Andy Edwards, he was locked down as well. So we found some clay, we worked on the photographs that were on Captain Sir Tom’s Facebook page and then we decided to make a bust.”