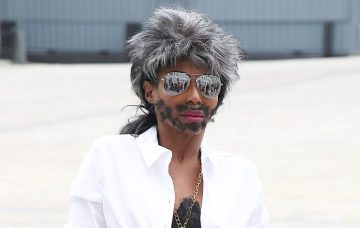 Simon, is that you?

Sinitta’s no stranger to a pretty outlandish outfit when it comes to X Factor – who remembers that palm leaf bikini?!

But she took things to a new level of fun for Tuesday’s X Factor conference to unveil the new judges.

The 54-year-old rocked up to the Somerset House event clad in a grey wig, fake beard, pale blue jeans and a white shirt unbuttoned to the waist.

Yup, she was channelling her inner Simon Cowell!

Sinitta – who is known for her long-standing friendship with ex Simon – had fans in fits of laughter as she adopted her best Simon pose for the cameras, legs slightly apart and standing tall.

She even had a bit of fake stubble stuck on her chest!

The star joked on Instagram: “It’s not Sinitta it’s Simon.”

Fans were quick to praise her sense of humour and style with one telling her: “You’ve definitely got the stance to perfection.”

Another said, “Got his shirt down to a tee lol love it,” while a third added: “Sat here laughing!”

Tuesday’s X Factor press conference was to officially name the new judges’ line-up for the 2018 series.

Simon will be joined by One Direction’s Louis Tomlinson and husband-and-wife team Robbie Williams and Ayda Field, marking the first time we’ve had three men on the panel.

Simon said: “This new panel is all about optimism, everyone has a real passion for finding a new star. The three new judges bring a whole new energy and I’m excited.”

Louis, 26, certainly has the experience given he started off on X Factor himself back in 2010, when he auditioned as a solo artist and was put into the newly-formed One Direction.

Robbie, 44, meanwhile, has experience as both a hugely successful solo artist and part of Take That.

The less expected signing is Robbie’s wife Ayda, 39, best known to many as a Loose Women panellist, although she’s also enjoyed a career as an actress.

X Factor said she brings “invaluable experience” to the panel about how the music industry works and what it takes to succeed.