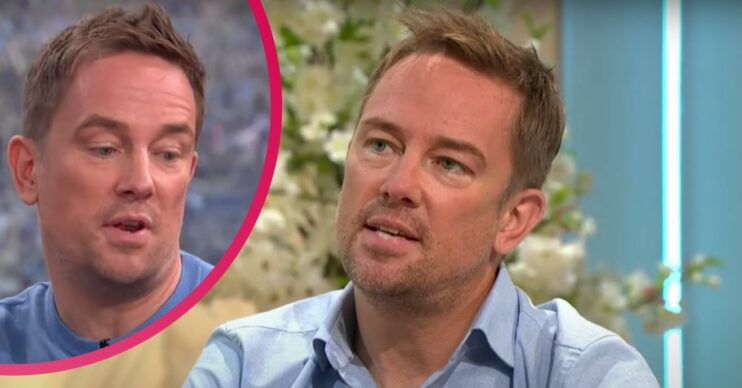 Simon Thomas has shared an image from his wedding day to Derrina Jebb on Instagram, three years after losing wife Gemma.

Former Blue Peter and Sky Sports presenter Simon was widowed in November 2017 after Gemma passed away.

She died just three days after being diagnosed with leukaemia. But Simon – and his son Ethan – have found happiness in his new marriage match.

Simon, 48, posted a pic showing him and his new bride, 30, beaming as they headed back up the aisle as man and wife. According to reports, they married in Norwich Cathedral.

The masked congregation clap the happy couple, following their vows, in the image.

Derrina looks radiant in a stunning dress with veil, holding a bouquet of pink and white flowers. And Simon looks very dapper in a navy waistcoat and suit, set off with a cream tie.

Other images shared by friends on the social media platform showed the couple celebrating with guests.

Among the shots was one of the newlyweds being showered in confetti as they appear to enjoy their first dance as husband and wife.

Tagging the wedding venue as Oxnead Hall in Norwich, the Insta user described the bash as a “magical evening”.

They added: “Simon and Derrina, you’re an absolute delight.”

How friends and followers reacted

Social media followers and celebrity pals were quick to comment about how happy they are for both Simon and Derrina.

TV presenter Angellica Bell indicated she had been on hand for the ceremony and celebrations.

However, they did not announce an engagement before he shared their wedding snap.

They reportedly moved in together earlier this year.