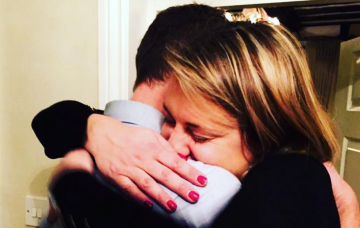 Simon Thomas has shared a heartbreaking message to fans as he returns to the home he shared with his late wife, Gemma.

The Sky Sports presenter and former Blue Peter star lost his beloved wife to cancer in November, just three days after she was diagnosed.

He and his eight-year-old son Ethan have been staying with his parents in Norfolk ever since Gemma’s death, but are now facing moving back into their family home.

Simon shared his feelings about the return home on social media, posting the same screengrab to both Twitter and Instagram.

“So tomorrow it’s home time,” he wrote. “Except it’s not the home I want to be in anymore.

“Since Gemma went I’ve managed 30 seconds in our bedroom before breaking down. The room where we slept and held each other, now a room of pain.

“Now is the time for snap decisions and new starts, but how on earth do I deal with a house that has her creative touch woven into its very being? A house that sings Gemma?”

The statement comes just days after Simon spoke about his dread of facing the new year without Gemma, saying the onset of January filled him with “stomach churning dread.”

He posted a shot of Gemma to Instagram expressing his fear of the new year starting.

The image was captioned “Don’t want 2017 to end, even though it ended up being the worst year of my life and can’t face 2018. Think I’m just going to go to bed.”

Shortly after midnight on New Year’s Day he tweeted, “My New Years resolution – to just get through another day. #lightinthedarkness”

Now he’s shared the difficulty of going back to what was a normal life, writing about his feelings on returning to life without Gemma.

“In three horrible days I’m back to being single,” he wrote. “Back to the place I never really enjoyed.”

He ended his statement by focussing on his son, Ethan: “The massive difference now is I have my precious boy to look after.

“I pray to God that if nothing else, I can do this last bit.”