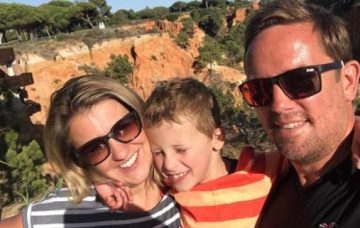 The former Blue Peter star has written an emotional letter to fans in which he explained the reasons for stepping down from his Sky Sports anchor position.

Simon, 45, was widowed in November when beloved wife Gemma, 40, died from acute myeloid leukaemia just three days after she was diagnosed.

It’s difficult to put into words what losing someone you love so much does to you when it happens so early in life. You don’t only mourn the loss of them, you mourn the lost years with them. Try as I do to be the best Dad I can for my boy, I mourn the fact he’s lost those immeasurable years of having bis mum. Life as we knew it has been shredded.

Simon has openly spoken about grief and life without Gemma in communications with fans, and started his own blog – A Grief Shared – to detail his thoughts and feelings.

In his latest post, the television presenter announced he will leave his Sky Sports role at the end of the football season in May.

He has not worked since Gemma’s death and told fans he made the decision to quit his post at Sky with a “heavy but peaceful heart.”

Simon said fans have constantly asked him when he would return to screens.

But he said the decision to leave Sky was prompted by several factors, most importantly a desire to spend time with Ethan and ensure he’s always there for him.

Simon explained his Sky role took him away from home to cover football at weekends and while friends and family had offered to care for Ethan, he wanted to be there himself.

“He’s lost his mum; for him, so much has changed, I can’t always be with him 24/7 but what I have no choice in is that I have to put him first,” wrote Simon.

“I need to spend the next few months working out with him how we move forward. What’s going to work for him; what isn’t? Much as those offers of looking after Ethan have been so generous; but is this the life I want for him, being passed around different people every time I go to work?

“No one knows him better than me, and I know he’d hate this being his every day reality. I need the time to work this all out.”

This summer we had planned to go to see our friends in Thailand as a family. We’ve decided to go this Easter instead. It won’t be the same, it’s another big first, I have very mixed feelings but I’m glad we’re going. #teamthomasontour

Simon also admitted he wasn’t sure he could summon the passion for football he once had, saying Gemma’s death had changed his perspective on things.

“Being totally honest, the game I have loved for my whole life, the game I’ve had the amazing privilege of working on for these past few years, at the moment just doesn’t matter,” he said.

“For the first few weeks I barely watched a game, mainly because I couldn’t focus on anything. More recently, I have enjoyed watching football again, but the flames of passion I once had for it are, for now at least, gone. I hope one day they will relight again, but at the moment there’s barely a flicker.”

Simon told fans he will now focus on life with Ethan and writing a book.

He wants to explore other broadcasting opportunities, and continue raising awareness and money for the Bloodwise UK charity.

The managing director of Sky Sports, Barney Francis, told Sky: “Simon has suffered an unspeakable loss and we have done everything we can to ease the burden he is carrying.

“I spoke to Simon this morning and fully support his decision. He is part of our family and always will be even now as he searches for his next path.”

Simon said the door has been left open for him to return.

After posting his blog, Simon tweeted: “Yesterday was a very emotional and wobbly day. I have been overwhelmed by the love and support for me on here and beyond. I am so very very blessed to be surrounded by so many who care. Thank you.”