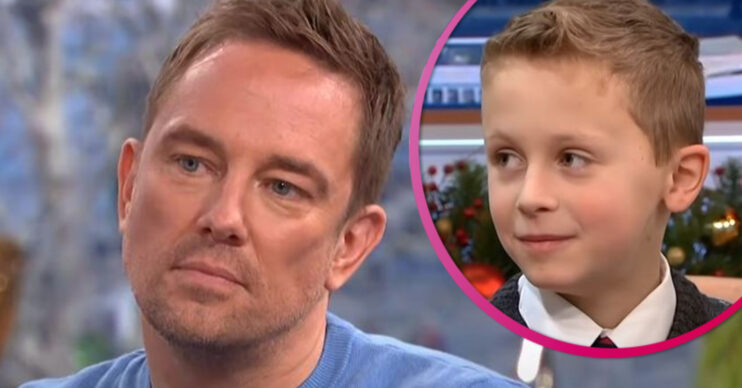 Simon shared his wedding news at the weekend

Simon Thomas had a very special best man at his wedding as he tied the knot with his new wife Derrina Jebb.

Simon, 48, revealed on Sunday (July 4) that he had married again, three years after the death of his wife Gemma.

He then shared a touching tribute to his 11-year-old boy Ethan, who delivered his best man speech stood on a chair.

What did Simon Thomas say about the wedding speech?

Simon wrote: “And I couldn’t have asked for two better best men – my legend of a mate Dan Ritchie and Ethan whose speech was just… well… amazing. We’re so so proud of him.”

The beautiful moment captured on camera shows Simon’s best friend Dan with one hand on Ethan’s shoulder. The Christian retreat manager also held the microphone for him.

They are dressed in matching groomsmen three-piece suits and smiling ear to ear as he delivers his speech.

Simon shared news of his marriage to Derrina, 40, with an image of them walking down the aisle captioned: “Love wins.”

It’s happy news for Simon after his wife Gemma tragically passed away in 2017 at the age of 40.

Gemma had been diagnosed with Acute Myeloid Leukaemia just three days before her death on November 24, 2017.

Simon used his profile to raise awareness of the aggressive cancer, which sees 3100 diagnosed in the UK each year.

The popular host released a book titled Love, Interrupted: Navigating Grief One Day At A Time.

In the book, he talks about how he felt guilty when Gemma died for not insisting on medical help sooner.