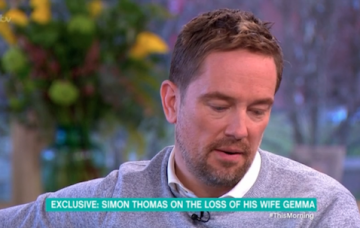 This is so sad

Mother’s Day can be a difficult time for many, and no one knows that better than Simon Thomas.

The former Sky Sports presenter has revealed how his son Ethan “sobbed uncontrollably” as they marked the first Mother’s Day since losing mum and wife Gemma, last November.

Writing on his blog, A Grief Shared, Simon, 45, explained: “Seeing your child sobbing uncontrollably is something that is always hard to see and so very hard to deal with, but to see them crying over something you have absolutely no power to change is heart breaking.”

In the post, entitled “I want my mummy”, the TV star went on to explain that after putting Ethan, eight, to bed, he heard his son crying.

Simon writes: “I ran back up and he was beside himself. As I held him and kissed him I asked what was wrong.

“The words he said next are the words that many a Dad hears plenty of times – ‘I want Mummy.’ In the ‘normal’ landscape of parenthood these are words we understand, these are words we’re used to being able to act on.

“In the eight years before it would have been nothing more than a shout down the stairs and up Gemma would have come to soothe his tears and provide that wonderful and unique motherly care and love. Except since November life has been anything but normal. Mummy is no longer here.”

Since then, the presenter has kept the diary-style blog, where he describes how “my world was turned upside down and inside out” by the loss of his wife of 12 years.

Gemma passed away just three days after she was diagnosed with Acute Myeloid Leukaemia.

In the blog description, he writes: “The journey we’re now on is the hardest and most painful of my life. In three short days I went from being a happily married man to a single parent.

“I express myself through words and through my photography and this is a place where I want to do that. I hope you find something of meaning in what I write and post – life is so precious.”

In the Mother’s Day post, added on Sunday, Simon confirmed that Ethan is having counselling and has been coping well with the loss of his mum – but admitted this particular night was different.

He added: “It was the most upset and distressed I’ve seen him since the night mummy died. It was impossibly hard to watch. It’s the stuff of nightmares for any parent. The question on my mind was how on earth do I help him through this?

“Saying it’s going to be OK (even though I believe one day it will be) seemed hopelessly inadequate – all I could think to do was to keep telling him time and time again that I loved him and how proud I was of him.

“Though it was impossibly hard to say, I told him how much mummy loved him, and how utterly proud she always was of him and how proud she would be now.”

Read more: Holly Willoughby sends cutest message to her kids on This Morning

It comes after the TV star spoke bravely about his loss on This Morning last month.

Presenters Holly Willoughby and Phillip Schofield were overcome with emotion as Simon described the heartbreaking moment he broke the news of Gemma’s death to his son.

He said: “I could remember his reaction to [losing a toy] and I’m like, ‘I’ve got to go home and tell him his mum’s gone’.

“He went in to see her twice that day [when she died]. I held him to her ear a couple of times, he said he loved her.

“I got home [afterwards] and grabbed him and looked deep into his brown eyes and said: ‘They couldn’t make mummy better’.

“He collapsed on the floor and I collapsed there with him. He’s been dealt a tough break in life at the age of eight, he’s lost his mum already.”