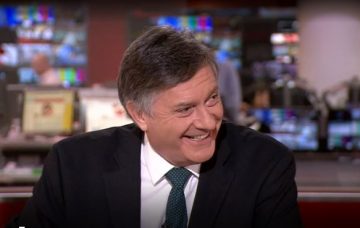 The BBC journalist had been on air when news broke on Tuesday that the Duchess of Cambridge’s younger sister Pippa had welcomed her first child, a boy.

Simon struggled to contain his laughter as he read the statement he’d been handed, seeming rather bemused by the language.

“It says here, she’s given birth. To a baby,” he said, breaking into laughter as he read the statement.

Well, viewers absolutely loved his less than enthusiastic reaction to the news!

Think you’re fantastic Simon.
you’re wit and sarcasm, keep it up always! You’re the best, keep it up.#Simon McCoy # BBC don’t ever loose this funny guy, say or how it is!! #makes my day!

BBC News – BBC's Simon McCoy announces that Pippa Middleton has given birth https://t.co/1wfqdAxW4y. hilarious – he just loves those baby news announcements – a woman has given birth to a baby!

One said, “He needs to do all the royal news”, while another quipped: “Never change Simon McCoy you’re a national treasure.”

A third said: “Think you’re fantastic Simon. Your wit and sarcasm, keep it up always! You’re the best, keep it up. BBC don’t ever lose this funny guy, say or how it is!! #makes my day!”

Of course, it’s not the first time Simon has made headlines for his underwhelmed reactions to baby news!

Back in October last year, he couldn’t hide his disdain when The Duke and Duchess of Cambridge announced they would welcome their third child in April, having already announced Kate was pregnant.

He told viewers: “Now, bearing in mind they announced she was pregnant back in September and it was thought she was around two or three months pregnant, I’m not sure how much news this is. But anyway, clear your diaries and get the time booked off. That’s what I’m doing!”

And, of course, there was the time he was standing outside the Lindo Wing awaiting the birth of Prince George and drily told viewers: “Plenty more to come from here, none of it news, as that will come from Buckingham Palace. But it won’t stop us.”

PLEASE tell me Simon McCoy is outside the Lindo Wing for #royalbaby watch for @BBCNews
The BEST royal baby coverage ever… LOVE the honesty in this… 😂https://t.co/NdvKZizjdj

In a new interview with Radio Times, Simon spoke about going viral with his Royal Baby reactions, saying he heard the royals had actually been watching him on TV while Kate was in labour.

He said: “Someone told me the family thought I’d got it absolutely right. They were watching and wondering what on earth was going on outside. Nothing was happening and I said as such.”

Simon also said he hadn’t been ticked off by BBC bosses for any of his remarks, pointing out viewers want fact rather than someone filling the airwaves for speculation for hours.

The Duke and Duchess of Sussex announced on Monday that they’re expecting their first child. Better book the time off now, Simon!

What do you think about Simon’s baby announcements? Leave us a comment on our Facebook page @EntertainmentDailyFix and let us know!