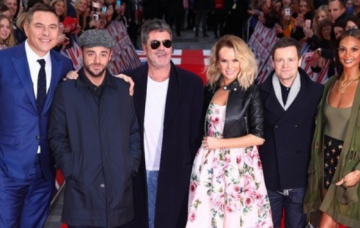 Are you ready to rhumble with Ant and Dec again?

The presenting duo could soon “wreck the mic” once more as Simon Cowell has reportedly asked them to re-release their biggest hit.

According to The Sun, the music mogul got the idea after numerous Britain’s Got Talent hopefuls have chosen the track to perform to at this year’s auditions.

He thinks it shows there’s a “huge appetite” for the catchy tune – which the presenters first released back in 1994 when they were still known as their Byker Grove character names, PJ and Duncan.

Their source told Dan Wootton’s Bizarre column: “Simon’s been in Ant and Dec’s ear all series trying to get them to mark next year’s 25th anniversary of the song by re-releasing it.

“He thinks there’s a huge appetite for the track as a load of hopefuls have sung it on BGT this year.

“He keeps going on about it backstage. Amanda Holden’s ­mentioned it several times, too. Both think it would go straight to Number One given the boys’ huge popularity.”

Their popularity was recently proved once again when the I’m A Celeb hosts won their 17th National Television Award last month.

So could they return to their pop roots?

“Ant and Dec seem reasonably up for the idea but it’s definitely Simon’s brainwave at this point,” the insider said.

It wouldn’t be the first time the pair, both 42, have re-released the track, which made it to number nine in the singles chart when it was first released.

They managed to hit the number one spot with it in 2013 when fans demanded it was made available again after the pair performed it on their Saturday Night Takeaway show.

All the royalties that time went to Childline and the best friends were delighted to top the charts.

They tweeted at the time: “O.M blummin’ G! We’re Number blummin’ 1! Thank u! You’re all nuts but we love! Cheers! D #LetsGetReadyToRhumble.”

Do you want Ant and Dec to re-release Let’s Get Ready To Rhumble again? Leave us a comment on our Facebook page @EntertainmentDailyFix and let us know what you think!