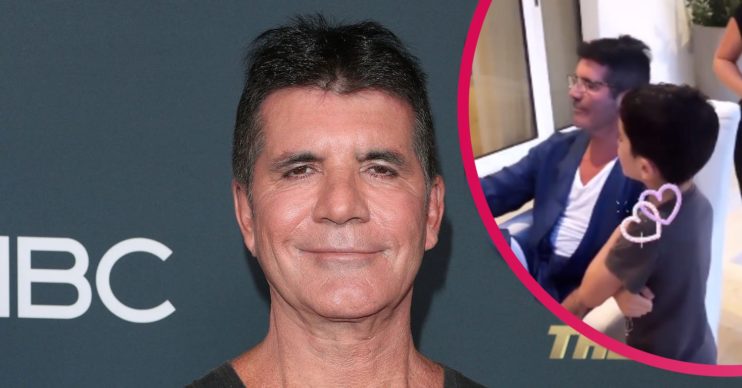 The Britain's Got Talent star suffered the nasty injury in August

Simon Cowell has been pictured for the first time since breaking his back in a bike accident.

The Britain’s Got Talent judge was spotted celebrating his 62nd birthday with his girlfriend Lauren Silverman and six-year-old son Eric over the weekend.

Taking to Instagram, close pal and former flame Terri Seymour documented Simon’s belated celebrations as the music mogul was surprised with a cake.

Lauren, who has supported the TV judge throughout his recent injury, was sitting next to Simon.

As Simon was presented with the cake, Lauren said: “The second cake that you’re not allowed to eat.”

He then went to blow out a birthday candle as Eric patiently stood next to his famous father.

The fun-filled celebrations mark the first time the BGT star has been spotted since the beginning of August.

Simon was testing out his new electric bike in the courtyard of his home when he fell and broke his back.

He’s now on high strength medication and needs a full-time nurse to help care for him, having had an intensive two month bout of physio.

However, the star was reportedly told he could be off TV for up to six months as his recovery has been hit with complications following surgery.

A source told The Sun: “It’s been a rough few weeks.

“Simon’s a fighter and fairly gung-ho. Naturally, he thought he’d be out of action for a few weeks and then, if not doing iron man contests, at least be back on the showbiz circuit.

“Instead, he’s had a setback from surgery to fuse two vertebrae and it has proven more complicated than a standard break.”

Ex and close friend Sinitta has since revealed just how serious the accident was.

Speaking exclusively to Entertainment Daily, Sinitta said: “It was a serious accident. So for people who love him, like me, it was very, very scary.

“It was very scary to hear it happen and also him being so far away. And because of lockdown not being able to jump on a plane and go and see him, it was very hard.”