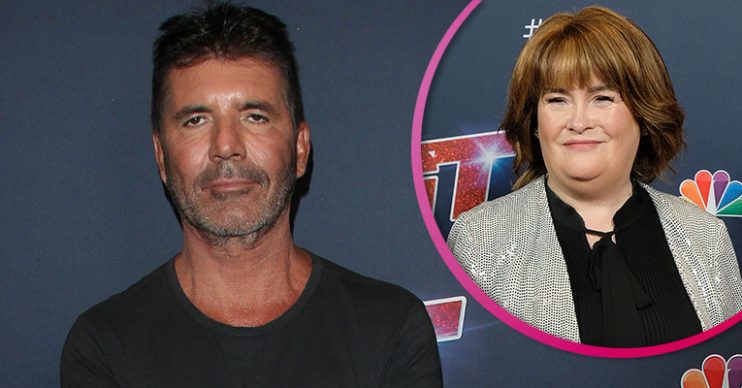 They attended the America's Got Talent red carpet

Simon Cowell and Susan Boyle both showed off their new looks at the America’s Got Talent live shows yesterday.

Music mogul Simon, 59, has lost around two stone after embarking on a new vegan lifestyle.

Arriving at the America’s Got Talent red carpet in California Tuesday, Simon showed off his pearly white smile and slimmer physique.

Meanwhile, Susan, 58, also looked different as she beamed for the cameras.

The singer, who was runner-up on the third series of Britain’s Got Talent, looked stunning in a simple black outfit, which she paired with a glam silver sequin blazer.

She had her brown hair styled in a sleek bob as she sported a glam makeup look.

Back in 2016, Susan lost weight after doctors warned her that her Type 2 diabetes could stop her from performing.

She told the Mirror at the time: “I needed to stop eating sweeties and cakes. It’s the bane of my life.

“I’m feeling a lot better now. I had moments where I needed help, and I reached out and I got the help I needed.”

Meanwhile, Simon also opted for a healthier lifestyle after a health scare in 2017 – when he fell down the stairs at his home in the middle of the night.

Last month, the dad-of-one revealed his good friend and ex-girlfriend Sinitta encouraged him to lose weight.

He told the Daily Star: “I’ve never felt better. It was Sinitta who pointed at my stomach last year in Malibu and I went: ‘I get it.'”

Earlier this week, Sinitta revealed the moment she told Simon he needed to lose weight.

In a video showed on Lorraine, the singer said: “We had just finished filming X Factor last year. Ryan Seacrest, Paula Abdul, Diane Warren, everybody was there.

Read more: Simon Cowell unrecognisable as he appears to have lost more weight

“And as we were leaving, I was kissing [Simon] goodbye and saying thank you, and as I said bye I whispered in his ear, ‘Baby, I’m really sorry to say this but… I love you so much, and I’ve got to do this.’

“‘You’re too handsome, you’re too fabulous, to let yourself go like this.'”

She added: “I just said, ‘You know, I just want you to be healthy and I want you to look good and feel good. This is not you and you need to address this.'”

What do you think of Simon and Susan’s new looks? Leave us a comment on our Facebook page @EntertainmentDailyFix and let us know.