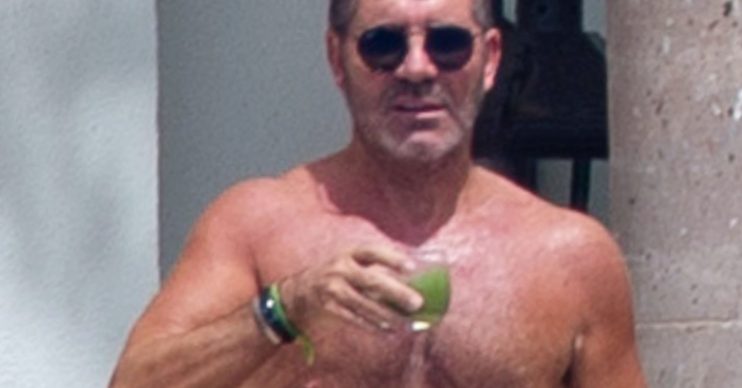 Simon Cowell has showed off his incredibly toned body after his 20lb weight loss.

The Britain’s Got Talent judge, 59, is enjoying a holiday in Mexico with his partner Lauren Silverman and their five-year-old son Eric.

And Simon was keen to show off the results of his new healthy lifestyle by flaunting his ripped physique as he enjoyed a green juice.

Other photos showed Simon carrying his adorable dogs, Squiddly and Diddly, to the pool and him enjoying the water with his son Eric.

Simon has recently had an image overhaul after embarking on a healthier lifestyle and diet.

In August, the dad-of-one revealed people claimed that he has had a gastric band fitted to help him lose weight but he insisted he hasn’t.

He told Best magazine: “People have said: ‘Oh, he’s had a gastric band fitted’- but I haven’t. If I had, I would admit to it. This diet is all about what you put into your body.”

He added: “I met this doctor in LA and he told me my diet was appalling and I had to cut out fatty foods and certain drinks. I could see the difference. Cutting out sugar made a massive difference.

“The first few weeks were difficult, but then I actually stopped craving sugar. I had also found a brilliant gluten-free beer, which helps.”

It was actually Simon’s good friend and ex-girlfriend Sinitta who encouraged him to lose weight.

Earlier this year, Simon told the Daily Star: “I’ve never felt better. It was Sinitta who pointed at my stomach last year in Malibu and I went: ‘I get it.'”

The star revealed his doctor told him to cut back on the six glasses of mango juice he was drinking every day.

Sinitta also spoke out about Simon’s weight loss in a video showed on ITV’s Lorraine.

“And as we were leaving, I was kissing [Simon] goodbye and saying thank you, and as I said bye I whispered in his ear, ‘Baby, I’m really sorry to say this but… I love you so much, and I’ve got to do this.’