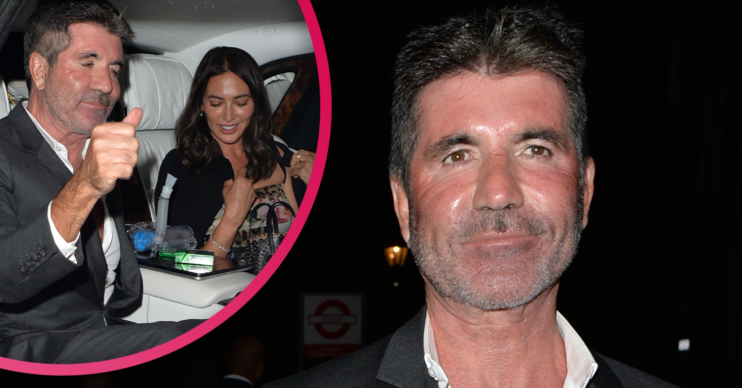 Sinitta recently revealed he was 'fitter than ever'

The pair joined friends at Harry’s Bar in London for dinner.

However, he did raise eyebrows when he got into his waiting car at the end of the night.

The X Factor boss looked fit and well as he exited the restaurant.

However, getting into the car, onlookers spotted what looked to be a portable oxygen machine sitting between Simon and Lauren.

Read more: Sinitta reveals Simon Cowell is fitter now than before his accident

The equipment could be seen next to a packet of cigarettes on the armrest of the car.

The oxygen tank had a mask and plastic tube attached to it, and Lauren was seen looking down at it briefly.

ED! has contacted reps for Simon for a comment on the pictures.

Double date for Simon and Lauren

Meanwhile, as they enjoyed their night out, Simon and Lauren looked happier than ever.

She looked gorgeous in a £1,850 Dolce & Gabbana patchwork dress, which she teamed with a cropped black jacket.

He’s fitter than he was before he broke his back.

It was a rare date night for the couple without son Eric, seven.

As they dined outside, they were joined by media mogul Richard Desmond and his wife Joy.

Oxygen tanks aside, it appears Simon is recovering well from his electric bike accident.

He had to undergo a six-hour operation to put a rod in his spine after breaking it in two places.

His friend Sinitta recently told ED!: “He’s fitter than he was before he broke his back.

“He’s walking 10,000 steps a day and doing his physiotherapy and eating really healthily and he’s in great shape.”

What’s next for The X Factor boss?

He recently returned to the America’s Got Talent panel, but has reportedly had to pull out of The X Factor Israel.

Simon was due to sit on the judging panel but it’s thought he has pulled out over “legitimate concerns” about travelling there at the moment.

X Factor UK host Dermot O’Leary has also confirmed that the show won’t return to our screens this year either.

Another of Simon’s babies – Britain’s Got Talent – has also been scrapped this year due to the pandemic.