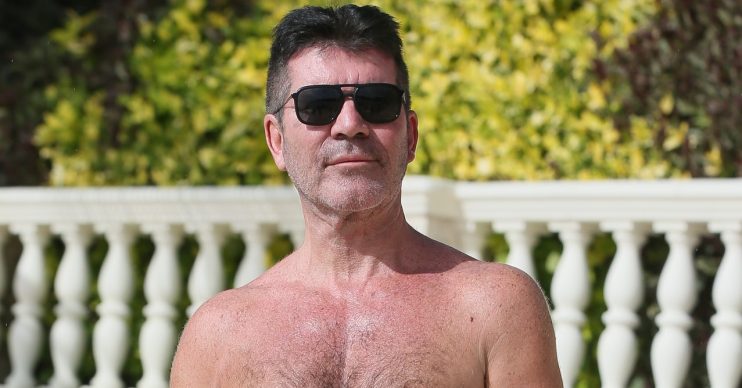 He reportedly walked into his front door

TV’s Simon Cowell sported a black eye as he soaked up the sun in Barbados this week.

The Britain’s Got Talent boss is enjoying the tropical getaway with his partner Lauren Silverman and their five-year-old son Eric.

As he took to the beach with his family, Simon appeared to have a black eye as he removed his sunglasses.

According to the MailOnline, Simon hurt his eye after knocking his face on his own front door.

A source told the publication: “The bruising happened when Simon hit his face on his front door and it also cut him above the eye.

The bruising happened when Simon hit his face on his front door and it also cut him above the eye.

“It’s been covered by make-up since then, when he was filming last Sunday’s show [of X Factor: The Band].”

Simon and his family are enjoying their annual Christmas break in Barbados.

And the X Factor judge wasted no time showing off his new toned bod after losing over 20 pounds thanks to his vegan lifestyle.

It seems Simon has also been working on his abs in recent months and his pal Sinitta recently revealed she bought the music mogul a TESLA Former toning machine for his 60th birthday.

Sinitta told The Sun: “For his birthday I got him this machine that you exercise with for half an hour every day and it absolutely rips your abs to shreds.

“So look out for him on the beach in Barbados this Christmas.”

Gushing over his overall transformation, Sinitta added: “I think he’s feeling pretty good. For a vain guy he really let go for a while. But now he’s going for the six-pack, the whole thing.”

Speaking to Closer magazine, Sinitta said: “I honestly don’t know if Simon will have more children.

“I think he’s so in love with Eric, and he’s so fulfilled and satisfied, that there just isn’t any love left.

“He’s completely besotted with Eric. Simon was always a softie – I’ve always said that to people.”