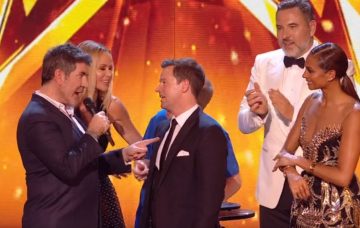 Dec hosted the BGT live shows by himself this year

Dec, 42, fronted the live semi-finals and final of the ratings behemoth by himself as television partner Ant McPartlin, 42, continues to take time away from work commitments.

And Dec’s efforts didn’t go unnoticed by his boss, who took a moment during Sunday night’s finale to publicly thank the star.

In the final seconds of the episode, just after Lost Voice Guy was declared the winner, judge Simon, 58, gestured for Dec to hand him the microphone.

Simon told him: “I want to say to you Dec, you have done an outstanding job this week. Seriously, thank you.”

Ever-modest Dec looked a bit embarrassed to be the centre of attention and simply smiled.

The audience, however, thoroughly agreed with Simon’s analysis and huge cheers rang around the Hammersmith Apollo, while the judges all clapped.

Viewers at home also agreed, lavishing Dec with praise for his work over the last week.

One even called Dec the “real winner” of the show.

The words Simon spoke to Dec at the end:
“I just want to say, to you Dec, you have done an outstanding job this week. Seriously, thank you.”

Simon was absolutely right when he said to Dec what an outstanding job he has done this week you would never of known Dec has put on such a great show!! #BGT

@antanddec totally agree with Simon! Dec you’ve done an Outstanding job couldn’t have been easy but you’ve been amazing a real inspiration. Kudos to you 😍😍😍

Dec opened the finale with a VERY energetic and fun routine to ‘I’m So Excited’ which saw him leaping and bounding all over the set, interacting with finalists, dancing his socks off and even doing a handstand on the stairs!

Over the weekend, Simon added to The Mirror: “Dec has been unbelievable. I have tremendous respect for him. He’s been a revelation.”

It’s the first series Dec has ever presented solo, and came on the heels of him hosting the final two episodes of Saturday Night Takeaway by himself, too.

His best friend and telly partner Ant stepped down from work commitments in March after a drink-driving incident and it’s unclear when he will return to TV.

The pair also host a third TV show together, I’m A Celebrity, that airs in November.

Ant has not indicated when he’s likely to resume TV duties, but Simon recently told The Mirror he’s hopeful Ant & Dec will be reunited in time for Britain’s Got Talent next year.

Simon said he’ll give Ant all the support he needs to return, adding: “I’m almost certain he’ll be back next year. And we want him back.”

Lee is the first comedian to ever win the show and takes home £250,000 and the opportunity to perform at the Royal Variety Performance.

He uses a voice synthesizer for his act, as cerebral palsy affects his speech.

Speaking on Britain’s Got More Talent after the results, Simon said he was “so happy” for Lee. “He’s such a great guy and he’s so funny. It makes you feel really funny after all these months to end with that, it was a great feeling, genuinely,” he said.

Simon added: “He is genuinely nice guy, that is very important, and he’s memorable. It takes gut to do what he did and I think the other important thing he said was, even with all the issues he’s had in his life, he overcame that with a really positive attitude which we all got.”

Lee, meanwhile, referenced his win on Instagram on Monday morning, posting a photo of himself and Dec on stage with the simple caption: “It wasn’t a dream then?”