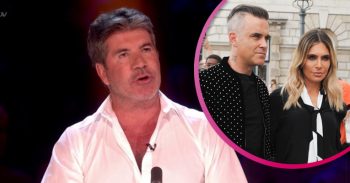 The couple quit the show earlier this month

Simon Cowell has insisted he’s still good friends with Robbie Williams and Ayda Field despite them quitting The X Factor.

Robbie and his wife Ayda announced they were stepping down from their roles as judges on the show earlier this month, as their busy schedules made returning “impossible”.

Speaking about why the couple left the show, Simon hinted Robbie and Ayda may have wanted “millions” to return.

Speaking to The Sun, the music mogul said: “It was no secret it was millions and millions of pounds.

“I am going to be really honest with you – and this is no ­disrespect to Robbie or anyone else who has been on the panel – my focus this year is mainly about the people who are coming on the show to compete.

“I’m probably talking myself out of a job here, but I think there has been so much emphasis on the judges. We’ve lost sight of the contestants. It got crazy, I never thought this would happen 20 years ago, when I started this show, that we would be talking more about the judges than the contestants, it’s complete nonsense.”

Simon said Robbie “could see where I was coming from” and insisted they still have a strong friendship.

He added that himself, his partner Lauren Silverman, Robbie and Ayda are going to “coupled-up things together” when he’s back in Los Angeles.

Earlier this month, Robbie and Ayda announced their departure from the show.

A joint post on Robbie’s Instagram read: “Sadly though it’s impossible to do everything … and we’re gutted to tell you we won’t be able to return to The X Factor this year. (sic)”

But the couple said they would still be working with Simon on other projects.

A quick update from Team Williams… it’s been a very busy year so far. Vegas has been incredible and we cannot wait for June and July to do it all again. I’ve got the massive @BSTHydePark show on July 14 and I’ve written the lyrics and music for the #RSCBoyInDress show with @guyachambers – opening on November 8. As well as all this we’ve got some very big announcements coming soon – but we can’t reveal all yet. Sadly though it’s impossible to do everything … and we’re gutted to tell you we won’t be able to return to The X Factor this year. We will, however, be working on projects with Simon going forward – and as huge fans of the show, we will still be tuning into The X Factor, voting and winding Simon up…x

They added: “We will, however, be working on projects with Simon going forward – and as huge fans of the show, we will still be tuning into The X Factor, voting and winding Simon up…x. (sic)”

The pair’s announcement came just a day after Louis Tomlinson – who was also a judge with the pair and Simon last year – admitted he is “less likely” to return to The X Factor panel this year because the show may clash with his album work.