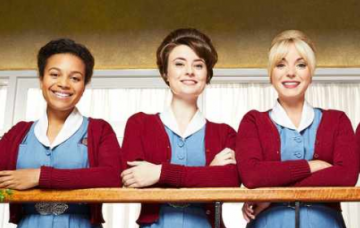 Harry Potter actress Miriam Margolyes is to guest star in Call The Midwife as the show explores the stories of child refugees in the UK.

The veteran star of stage and screen will appear in this year’s Christmas episode as the BBC announced filming was under way for the festive one-off as well as a new series of eight episodes for 2019.

Miriam, 76, will play the forthright Sister Mildred after previously announcing her desire to star in Call The Midwife.

Her character arrives unexpectedly at Nonnatus House with her hands full with four Chinese orphans who fled China and were adopted in the UK as part of the World Refugee Project.

Miriam will also appear in episode one of series eight, which is set in spring 1964 ahead of the Queen’s royal birth, and sees the arrival of new cast members Fenella Woolgar, Ella Bruccoleri and Georgie Glen.

The announcement comes after the BBC confirmed a trio of stars, including Bryony Hannah, who appeared in the series since its launch in 2012 as nun Cynthia Miller, had decided to quit the drama.

The Christmas special will also see a new spiritual leader elected as The Order’s Mother Superior after the incumbent was taken ill with Jenny Agutter’s character Sister Julienne favourite to take over.

Executive producer Dame Pippa Harris said the guest-starring of Miriam was an “additional treat” and labelled her character “formidable”.

“It’s an honour to have such skillful and charismatic actors joining the cast and bringing Heidi Thomas’s wonderful scripts to life,” she added.

In 2016 Miriam told This Morning of her desire to star in the hit BBC One drama.

“I love that programme, I think they are all majestically brilliant – fine actresses – so I want to be there,” she gushed.

“There is no end to what I would do to get on that programme. I love it, I love that show.”

Are you excited to see her join? Leave us a comment on our Facebook page @EntertainmentDailyFix and let us know what you think!