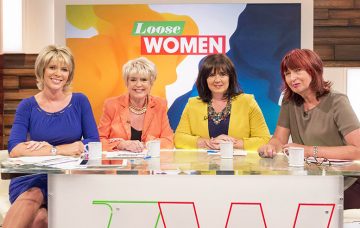 The star, 53, said he’s been asked to join the daytime show as its first ever full-time male panellist because he was such a hit with viewers.

Craig told the Daily Star: “I love going on Loose Women. I did my first one with Peter Andre.”

He continued: “I just love doing the show because you can speak candidly about things.

“They did ask me to join the panel full-time, so I would be on every Friday.”

However, Craig said having a busy schedule could hold him back.

He added: “The problem is finding the time to do it. I’m booked three years in advance so it’s really tough.”

Even if he doesn’t take up the offer to be on Loose Women, Craig dropped a huge hint that he could have his own talk show in the future.

He said: “Don’t put it past me to have my own chat show!”

Craig is best known for his role as a judge on BBC’s Strictly.

With the competition series set to grace our screens again later this year, Craig said he is open to changes in the show’s format.

During an appearance on Friday’s This Morning, Craig said he sees no reason why same-sex couples couldn’t feature on the show in the future.

When asked if he would like to see same-sex couples on the programme, Craig replied: “I would love to champion that.

“Other territories do it, so there is no reason why we can’t, but that’s obviously not my decision. But I would love to see it.

“Whoever is tall goes forward and whoever is shorter goes backwards, it’s really that simple. I think it’d be good!”

He told The Sun: “I think women should be paid the same as men. That’s for sure.

“But what would you say to a woman coming in after you’ve been in the job for 15 years when they’ve done absolutely nothing to earn it?”

He added that he would expect Shirley to “start on something lower because she’s never been on TV before”.

He said: “Len Goodman earned a major reputation and put the show on the map like we all did. And I don’t think it’s comparable.”

Would you like to see Craig as a panellist on Loose Women? Leave us a comment on our Facebook page @EntertainmentDailyFix and let us know what you think!