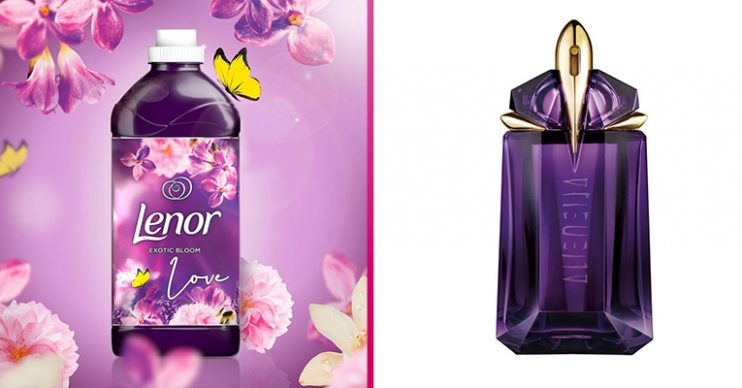 Fabric softener makers Lenor seem to be taking a leaf out of Aldi’s book when it comes to designer dupes.

After we told you that Aldi was selling perfumes that smell just like their designer counterparts for just £5, it appears Lenor has followed suit.

Shoppers posting in the Extreme Couponing and Bargains Facebook page have noticed a striking similarity to a Thierry Mugler perfume that can cost more than £80 in the shops.

Lenor’s Exotic Bloom fabric softener, which is on offer in Home Bargains for just £2.99 at the moment, smells just like designer perfume Alien.

While we know that Alien fans won’t swap their designer scents and drench themselves in fabric softener, it could mean you spritz less of the pricey stuff if you’re using the Lenor in your washing machine.

Read more: Cloud-shaped bath bombs that leave behind a “rainbow trail” are on sale for just £1

Shoppers were quick to point out that the floral, woody and amber notes of the designer scent can also be found in the household essential.

One savvy super-shopper revealed: “OMG they now have Lenor that smells similar to ALIEN PERFUME – available everywhere if it doesn’t get sold out!”

Another added: “OMG smells like my perfume!! We need to buy this!”

For those who haven’t sniffed Alien – and, quite frankly, where have you been? – it’s a “mysterious fragrance” that was released by Theirry Mugler in 2005.

“Its base notes consist of warm white amber, with woodsy middle notes and a top note of Indian jasmine,” the blurb revealed.

OMG they now have Lenor that smells similar to ALIEN PERFUME – available everywhere if it doesn’t get sold out!

The perfume costs around £80 for 60ml in Boots, while you get a whole lot more for just a fraction of the price with the Lenor.

If you are an Alien fan and want your home to smell of the stuff as well as yourself and your clothes, then pick up a bottle of Mrs Hinch’s favourite Zoflora.

The Midnight Blooms fragrance is also said to have more than a whiff of Alien.

“This smells just like Alien perfume and it smells amazing,” said one fan.

It’s available in Asda, Tesco, Sainsbury’s and Morrisons for £1.48.