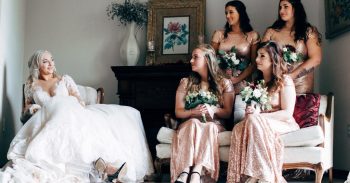 Many people didn't agree with it

A list of “12 rules every bridesmaid should live by” has sparked a debate after being shared online.

The rules were shared on a wedding Facebook group, and many people were gobsmacked by the demanding list.

Some of the rules included “never be drunker than the bride” and “don’t complain about your bridesmaid dress”.

The post was captioned: “If you have to demand or tell your friends how to act, or how to be respectful, should they really be your bridesmaids… or even your friends?”

The first point read: “1. You’re not just a bridesmaid. You’re a therapist, personal shopper, secretary and straight up back-haver.”

The list continued: “2. Don’t complain about your bridesmaid dress unless the bride has complained about it first.

“3. Y’all need to eat before the wedding. There’s an open bar ahead of you.

“4. You are on lipstick patrol for the bride ALL NIGHT,” the list continued.

“5. If a chatty uncle is talking the bride’s ear off, step in and take one for the team. 6. Nothing good can come from bringing up an ex during a wedding speech.

“7. If you’re in the bathroom at the reception, check the stalls before you say ANYTHING about ANYONE.

“8. At no point should you be drunker than the bride. 9. Dance with the least attractive, single groomsman at least once.

“10. Your problems do not exist on the wedding day. No whining allowed.

“11. Hooking up with that cute cousin? Totally fine. Check with the bride before you hook up with the cute brother. 12. If the dance floor is empty, you know what to do.”

As well as the original poster stating they probably weren’t your friends if you had to ask them to do all these things, another person commented: “I hate it… you’re a bridesmaid, not a secret service agent. Chill out,” while someone else said: “This is ridiculous!”

Others agreed with some of the rules.

Another wrote: “Numbers 2, 6 and 7 are common sense. Number 3 is really smart. The rest are garbage, especially number 1.”

What do you think about the rules? Leave us a comment on our Facebook page @EntertainmentDailyFix and let us know what you think of this story.