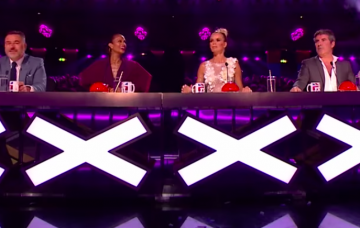 Britain’s Got Talent viewers have been left wondering if yet another gaffe was made during the last of the semi-final live shows.

After week that had seen a swearing crew member get caught on stage and host Dec make an unfortunate slip, fans were divided over whether another blunder had been made during Mandy Muden’s hilarious audition.

Comedienne and magician Mandy had enlisted the help of a stunt double to open her act.

While her voice could be heard, the doppleganger – dressed in Mandy’s clothes and an auburn wig – walked onto the stage before dramatically falling off the edge.

However, as the 55-year-old hopeful got underway with her performance, the camera flashed to the stunt double clambering off a crash mat – with his BALD head on show.

Fans were quick to take to Twitter, but while some believed it was a mistake, others felt it was just part of the act.

One tweeted: “Don’t think they were supposed to show the stunt man taking his wig off on Mandy’s act #BritainsGotTalent.”

Another added: “Was that Mandy stunt double supposed to be there or….? #BGT #mandymuden.”

However, believing the chap was supposed to be caught on camera, one fan tweeted: “Mandy Muden is brilliant, a few inappropriate comments, absolutely hilarious. And the stunt double was so obviously meant to be seen.”

Sharing the same view, another wrote: “Seeing Mandy’s stunt double head off the stage with his wig off just made the act even funnier and amazing.”

Unfortunately for Mandy, although she made it into the top three, she hasn’t secured a place in Sunday night’s live final.

Comedian Micky P Kerr went straight through, leaving the judges to decide between Mandy and the Giang Brothers.

With two votes each from the judges, David sent it to the public vote – giving the Giang Brothers a spot in the final.

Speaking afterwards, Mandy said: “Thank you very much for voting for me, it’s been amazing. Thank you!”

The Britian’s Got Talent Live Final airs on ITV1 at 7.30pm on Sunday June 3.