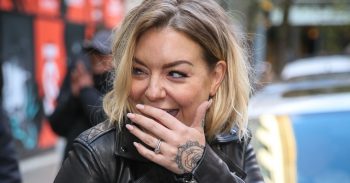 The couple got engaged last year

The Gavin & Stacey star has since deleted the tweet, after a couple of fans picked up on the reference.

She shared a shot of herself and Jamie to mark the long weekend, saying: “Bank holiday pouting with the hubby.”

However, according to The Mirror, the tweet was deleted just one hour later.

Fans were quick to reply to Sheridan’s tweet, with many congratulating her and speculating whether the actress was married.

Happy Easter Sheridan & Jamie. Congratulations my lovely 😊 if you have tied the knot with your best friend & soul mate so very happy for you. You deserve everything you have worked for. ❤️

Ent Daily has contacted reps for Sheridan for comment.

It’s not the first time people have speculated about the official state of the relationship – in November Jamie was spotted wearing what seemed to be a wedding band.

But the pair are yet to confirm whether a wedding ceremony has taken place.

The couple had a whirlwind romance after meeting on Tinder last year.

It took Jamie only three months to decide he wanted to marry Sheridan, but despite the modern meet-cute, when it came to proposing he took the old-fashioned route.

Before he popped the question, he made sure he had her mother’s approval.

Speaking on This Morning after announcing the engagement, Sheridan joked that her mother’s blessing came with a word of warming.

She said: “I thought, someone’s gonna have me! When he asked my mum to marry me she said, ‘Are you sure you can handle her?'”

She shared a shot of her dramatic transformation for the role, showing just what make-up can do.

She’s now getting ready to start rehearsals for Joseph and the Amazing Technicolour Dreamcoat, in which she’ll be playing the narrator.

Do you think she’s secretly tied the knot? Leave us a comment on our Facebook page @EntertainmentDailyFix and let us know.