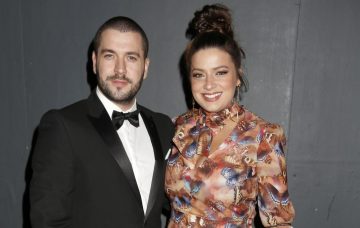 Ex-Corrie star has a new film role alongside his fiancee

With two parents as actors, Willow Ward is going to become accustomed to spending a lot of time on film sets!

The 19-month-old daughter of Shayne Ward has already been to visit her dad filming Coronation Street and now she’s been to see him and her mum, Sophie Austin, back at work in another drama.

The tot visited her mum, who has previously appeared on shows including Hollyoaks and Doctors, and dad in their new roles in Stairs – a military-themed sci-fi/horror film.

Not much is known about the movie so far but IMDB says it’s about “a special ops squad who find themselves trapped on a never-ending stairwell forced to climb or die. To survive, they must revisit their past sins if they ever want to get off.”

Sophie was delighted to have her little girl join her and Shayne at work for the day and shared her joy with her Instagram followers by posting some images of the occasion.

She captioned one picture “little lady on set” showing the toddler in blue dungarees and a white T-shirt with her face obscured.

Willow is surrounded by Shayne and Sophie’s cast mates dressed in their military costumes and appears to have made friends with a dog involved in the film.

In another picture, Willow can be seen being carried to see a scene about to be shot.

Her fans said they were delighted to see Sophie and Shayne had been cast in a movie and that Willow had been able to see her talented parents in action.

“Sophie your family is soooo cute. You have a really cute daughter,” said another, adding, “good luck for your awesome Stairs part. I’m so glad a true actress got a part in a awesome movie.”

A third wrote: “Willow is so lucky to have a actress as a mum. And a actor as a dad. You guys can make cool, outstanding movies, dramas for your family to watch.”

Sophie revealed more behind the scenes shots on her Stories, showing a military plane and a panoramic view of the outdoor set for the day which she captioned “Willow May set visit #startthemyoung.”

Sophie and Shayne welcomed Willow in December of 2016. The pair then announced their engagement late last year.

Shayne, 33, left Corrie in May in a hard-hitting storyline where his character Aidan took his own life.

The former X Factor star said he’d decided to leave the soap after four years to spend more time with his family and take on other roles.

It seems he’s achieved both these goals, sharing pictures of his days out with Willow on Instagram, and bagging a film part alongside his fiancee.

There’s also been rumours that he could go into the jungle on this year’s I’m A Celebrity. His former co-star Kym Marsh has said he would make a great addition to the camp!

Would you like to see Shayne on I’m A Celebrity? Leave us a comment on our Facebook page @EntertainmentDailyFix and let us know what you think!