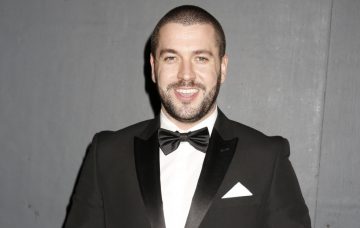 Former X Factor star Shayne Ward got in some good old family time this weekend, spending a nice day out with daughter Willow.

Shayne’s fiancée, actress Sophie Austin, posted an adorable shot of the pair, enjoying a day at a food festival.

Clearly the family was prepared for the heat, with Willow rocking the “just a nappy” look.

But Willow appears to be having some indoor adventures as well – last week Sophie shared a shot of the toddler beginning to experiment with music – namely, a drum kit.

Sophie and Shayne welcomed Willow in December of 2016. The pair announced their engagement late last year.

It seems like Shayne is soaking up the family time since leaving Coronation Street back in May.

As he was leaving he admitted that the shows excellent catering had led to him putting on three stone – but insisted he had no intention of trying to lose the extra weight.

Talking to The Sun at the time, he said being a bit cuddlier was a good thing.

“As long as my cuddles are the ­cuddliest for my little girl then I don’t care about my shape, as long as my health is all right.

“I don’t want to be absolutely ripped to shreds any more.”

He also appeared in Loose Women’s Body Confidence campaign, showing off his new found dad-bod, claiming the campaign led to other men embracing their own.

“What I loved about it was the response on Twitter from guys uploading their body shapes and saying it has inspired them to be confident too.”

Have you been having family days out in the sun? Leave us a comment on our Facebook page @EntertainmentDailyFix and let us know what you think!