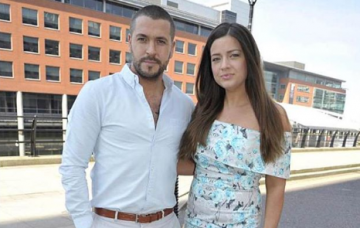 Took a trip down memory lane with his fiancée

Shayne Ward has been making the most of having more time to spend with his family following his exit from Coronation Street.

The actor, who played Aidan Connor on the cobbles for three years, enjoyed a special day out over the sunny Bank Holiday with fiancée Sophie Austin and their daughter Willow, one.

The trio were joined by other members of their family as they took a trip to Hatfield House in Hertfordshire, a place Sophie said she had fond memories of from when she was little.

Sharing an image of the group heading towards the historic house, she wrote: “Family day out at one of my childhood favourite places.”

She also posted other snaps with the caption “stepping back in time”.

One of the pictures shows Shayne looking cool in shades and a white v-neck T-shirt in front of the Tudor property where Queen Elizabeth I grew up.

In another, he admires a portrait of the royal, who is considered one of England’s greatest monarchs.

In another snap, the X Factor champ enjoys an ice cream with their one-year-old daughter and larks about in the house gardens.

Shayne, 33, left Corrie last month in emotional scenes after his character took his own life.

Shayne said he took the decision to leave Corrie after three years so he could act in more serious dramas, and to spend more time with his family.

He recently told OK! magazine he’s relishing life after the soap, as he’s getting to see lots more of little Willow as she develops.

He said: “It has been something I’ve missed out on. Being in soap is working every day for a week, maybe a month at a time.

“Now I get to put Willow to bed, I get to feed her at four in the morning and I’m there to see her walk up with a big smile on her face.”

But Shayne could end up spending some time away from home later this year – as he’s been tipped to go on I’m A Celebrity!

What would you like to see Shayne star in now he’s left Corrie? Leave us a comment on our Facebook page @EntertainmentDailyFix and let us know what you think!