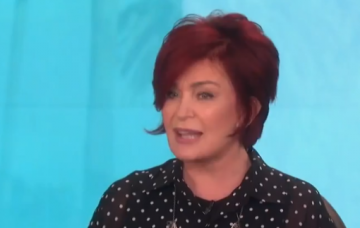 Sharon Osbourne gave away far too much information this week on US chat show The Talk.

The X Factor judge stunned the presenters and studio audience when she admitted she’d once had to poo in her own front garden.

Sharon admitted she was locked out of the house at the time and was so desperate, she had no choice but to answer the call of nature immediately.

She confessed on the American equivalent of Loose Women: “Ozzy was in rehearsals, and it was about two in the morning. I get home and I don’t have the key and there was nobody there.

“Anyway I had to go in the front garden.”

Seeing the shocked reaction of the people around her, the mother-of-three assured them there was no public indecency as, “there were loads of trees and nobody could see a thing.”

But the story gets a lot more unpleasant as Sharon revealed what happened when her gardener came the next day.

The 65-year-old hung her head in shame as her co-stars laughed and cringed at her revelation.

Sharon and her husband Ozzy live in Beverley Hills with her beloved dogs.

It’s yet to be confirmed if she will be returning as a judge for the next series of The X Factor.

Simon Cowell had been rumoured to be looking to shake things up by dropping Sharon, Louis Walsh and Nicole Scherzinger.

But Louis said he and Sharon signed three-year contracts when they returned to the show in 2016, which mean they’d have to be paid a hefty sum to be ousted.

“My contract is watertight,” Louis told The Sun. “I’ve checked it out with someone and have told Simon that.

“He has asked me to come and see him in LA. I have spoken to Sharon. She’s said they can only sack us if they pay us. Sharon did say she was surprised she hadn’t been given any filming dates.

“I don’t think they’ve finalised what they’re going to do with the panel. We have three-year contracts. We both do.”

Do you want to see Sharon back on The X Factor? Leave us a comment on our Facebook page @EntertainmentDailyFix and let us know what you think!