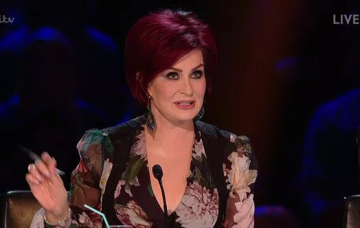 She criticised Simon for calling the slump "funny"

Former X Factor judge Sharon Osbourne has spoken out about the show’s falling ratings, pointing the blame at Simon Cowell.

Read more: Jamie Redknapp’s concern for Harry while on I’m A Celebrity

Speaking to The Sun earlier this week, Simon took a philosophical approach to the ratings slump, claiming they weren’t as important to him as they would have been in the past.

“My perspective on life is slightly different than it used to be,” he said. “I used to be really competitive, read the ratings and have white knuckles. Now I find it funny.”

He claimed that years of working through the night had taken a huge toll on this life, and that taking a more relaxed attitude to the show, and prioritising his son, Eric, was a healthier choice.

“This is the best I’ve felt in years because I’m going into the New Year now without any weight on my shoulders any more,” he said. “It’s like I’ve dealt with everything I’ve had to deal with.”

But now his former colleague has spoken out against him, saying his habit of tinkering with The XFactor’s format had caused the plummet in viewers.

Speaking to The Sun, she claimed she held no malice towards Simon, but felt he was hurting the show.

“Unfortunately, not out of malice, but I am only saying this because Simon’s quote thinks it is funny, that the figures have dropped, and dropped and dropped through the course of the show,” she said.

Sharon was fired as an X Factor judge after insulting Simon on Howard Stern’s radio show.

During the radio interview she called Simon a “pain in the [bleep]” and said she was glad not to have to do the audition stage of the show.

“I don’t have to have those kids singing in my face,” she said. “They all suck.”

She also dismissed new judge Ayda Field, claiming she was just a soap opera star and didn’t have the expertise for the role.

Do you think Simon’s to blame for the ratings? Leave us a comment on our Facebook page @EntertainmentDailyFix and let us know what you think!