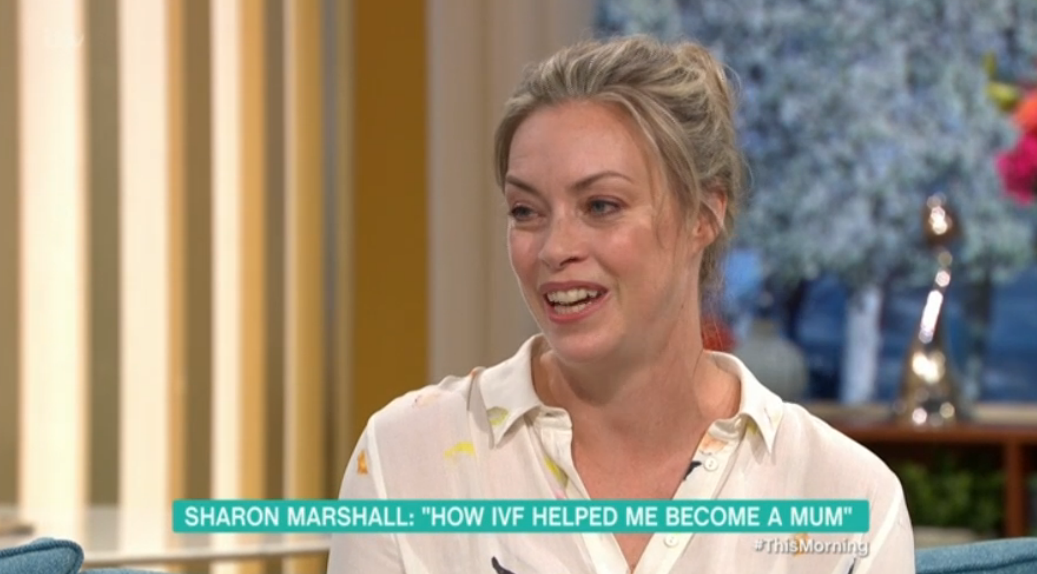 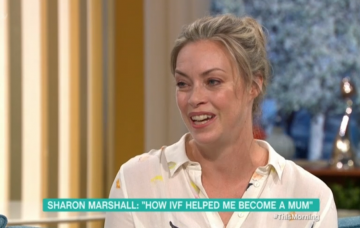 Sharon Marshall returned to This Morning on Tuesday to introduce her baby daughter to viewers.

Sharon, 46, opened up about life with a newborn and how she undertook seven rounds of IVF to become a mum for the first time.

Speaking to hosts Holly Willoughby and Phillip Schofield about adjusting to life as a new mum, Sharon said: “It’s amazing. I just feel brilliant. I’ve had no sleep, I’m getting three hours of sleep.

“The birth was just magical, we didn’t know if she was going to be a boy or girl so that moment when this baby came up and she came out screaming like a rockstar.

“Her cot is next to the bed and I just wake up and there’s a little face in the morning. It’s wonderful.”

Sharon went on to speak about how she endured seven gruelling rounds of IVF treatment before welcoming her gorgeous baby girl.

Becoming teary, she explained: “It has been a six-year battle with my partner and along the way, I remembering feeling so isolated and that I was the only one going through this.

“You feel so isolated and almost embarrassed. Nobody talks about fertility and it wasn’t until the very last go that we told our friends.”

Sharon said she wishes she had spoken about her IVF experience earlier because she now realises more people are going through it than she first thought.

The star explained that she did get pregnant on the first IVF attempt but something was wrong with the embryo and it didn’t develop.

Sharon said: “We thought we were there. We thought we had done it but we got to the scan and we were told nothing was there which was a huge shock.

“I stupidly kept it to myself and I went to work the next day. It took me months and months to gee myself up to have another go.”

She continued: “One of the most brutal things about IVF is you do a blood test in the morning and then a complete stranger calls you and tells you if it worked or not.”

Sharon recalled a moment she received the call in work and was told the result was negative, and shortly after she hung up, she was told she had to hold a baby for a bonniest baby in Britain segment.

Sharon said their This Morning co-star Denise Robertson, who passed away in 2016 after losing her battle with cancer, “counselled” her through her “early losses”.

Speaking about IVF clinics, Sharon added: “There’s so much hope in that clinic and people put their life savings into something, so you can’t just go into the waiting room and burst into tears [after finding out bad news].”

Dr Chris Steele, who was one of the first people Sharon told about her pregnancy, then brought out baby Betsey on to join Sharon on camera.

Phil gushed: “She’s so so beautiful,” while Holly was left besotted with the newborn.

Can you relate to Sharon’s IVF struggle? Leave us a comment on our Facebook page @EntertainmentDailyFix and let us know what you think!