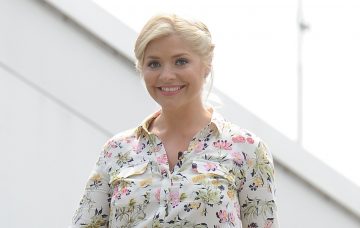 She took Harry, Belle and Chester to watch Arsenal play

Holly Willoughby treated fans to a rare photograph of all three children as they enjoyed a Bank Holiday Sunday at the football.

The television presenter, 37, rarely ever shares images of her three little ones to social media, but made an exception as they watched Arsenal beat Burnley 5-0.

It was a particularly special match for fans, as it marked Arsenal manager Arsene Wenger’s last home game before he leaves the club.

Holly shared a photo of herself sitting with children Harry, eight, Belle, seven, and three-year-old Chester, as they watched the match below them.

Read more: Your full guide to the 2018 royal wedding

Her caption read: “Making memories on a memorable day at The Arsenal.”

Unsurprisingly, given Holly’s desire to keep her children away from the limelight, all three kids had their backs to the camera, meaning their faces were obscured.

Holly and her television producer husband Dan Baldwin have always chosen to keep their children away from the glare of the spotlight, so the only glimpses fans ever get of them is when Holly posts photos to social media, with their faces hidden.

Although Holly doesn’t share her children’s images with the public, she’s happy to talk about how much she loves being a mum.

She recently told Hello magazine: “All I ever wanted to do was to be a mum. It wasn’t like when I was at school I thought, ‘Oh, I’m going to be this big career girl’.

“Being a mummy is definitely my most favourite job of all, without a shadow of a doubt.”

Holly, who is not on This Morning on Monday because of Bank Holiday, has also said she’s willing to put her career on hold for the sake of her family.

She told The Sun: “I don’t really want to do more, I just want to pause everything and keep everything as is. My biggest challenge over the next few years will be parenting my children as they get older.

“My main focus over the next few years is churning out three very grounded, normal, happy, content children, teenagers and adults, eventually.”

Holly has spoken openly about being incredibly happy as a mum of three, but also being open to having a fourth child one day.

She told ITV’s Lorraine last year: “I love being pregnant. I loved giving birth, weirdly, I loved all of that. So the thought of it being over – it’s like not being able to wear a wedding dress again.

“Maybe one day, I don’t know, but we’re very happy as we are. We feel complete. Three feels good for us. Two children was lovely but two felt like everybody was waiting for a baby. Chester sort of cemented us.”

In a separate chat with The Sun’s Fabulous magazine in September, she said: “When you look around the table and you’ve got these little people you’ve made together who are just so funny, that’s when you think, ‘Maybe we should have more’.

“But that’s not a reason to have more! That’s what I keep telling myself. No, no, no! I think I’m really, definitely done. I think.