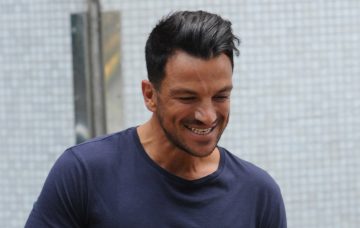 The singer joked about their recent date venue

Peter Andre has joked about the date he recently shared with wife Emily as they approach their third wedding anniversary.

“We know how to party. Garden Centre date,” he wrote beside a selfie of the pair he uploaded to Instagram on Wednesday.

In the picture, the Mysterious Girl singer is colour-coordinated in a blue T-shirt and baseball cap, while Emily wears a white T-shirt and cool shades.

The selfie quickly gained thousands of likes from Peter’s followers.

“Beautiful pic you make a lovely couple,” commented one.

“Absolutely love how natural and beautiful you pair are,” said another.

“You guys are beautiful,” agreed a third.

Others said the 45-year-old’s choice of date venue wasn’t too bad, as long as he treated his wife to coffee and cake at the cafe!

Peter and Emily married in July 2015 and have since had two children, Amelia and Theo.

“We both love food so I expect we’ll go out for a nice meal together,” she said.

However, she might end up doing more than that after Peter told Hello! magazine he has a surprise up his sleeve.

“I’m going to take her somewhere special. I like doing little spontaneous things and I almost don’t want her to read about it,” he said.

He added though that it would be hard to top a surprise trip he once took her on to Venice.

He recalled: “We landed in Italy, she had no idea where we were. I wouldn’t let her look at any signs. Got her on a boat.

“As soon as she saw the signs of Venice she was like ‘Oh my God’. So I got her all the way to Venice without her knowing. It’s those kind of fun things I like to do with her.”

Emily added in her interview with OK! that she’s happy with the theme of this year’s anniversary when it comes to buying presents.

“It’s leather. I’m grateful actually because it gives me loads of options for what to buy Pete as he’s quite tricky to buy for,” she said.

Peter recently told the magazine he loves Emily “more now than he did when they met”, and she said she feels “exactly” the same way.

Meanwhile, it was revealed this week that Peter has landed a role in a new children’s movie

Do you think Pete and Emily make a cute couple? Leave us a comment on our Facebook page @EntertainmentDailyFix and let us know what you think!