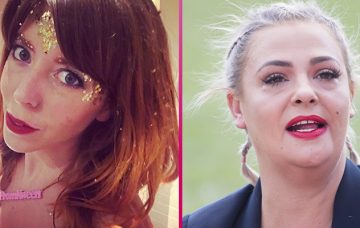 The pair met on this year's Strictly Come Dancing

Seann Walsh’s ex girlfriend Rebecca Humphries has reached out to Ant McPartlin’s wife Lisa Armstrong on Twitter to offer her support as she continues to battle with her ex.

Rebecca was left humiliated when her live-in boyfriend of five years cheated on her with his Strictly Come Dancing partner Katya Jones, sharing a kiss on a boozy night out – which also happened to be on Rebecca’s birthday.

Meanwhile, Lisa, 42, revealed she was “gutted” after she was axed as a make-up artist on Britain’s Got Talent when bosses decided it would be “untenable” for her to work with her ex following their bitter split.

Lisa replied to the heartfelt message, writing: “Thanks hun xx”

Both women are set to see their exes return to TV soon, with Seann taking part in the group dance curing the Strictly final. However, Rebecca has insisted she is glad the pictures of her ex drunkenly kissing Katya were taken because it made her realise she was “not crazy”.

The comedian has gone on to use the split as material for his stand up routine, shocking an audience by saying: “Before the show, the newspapers were complaining they didn’t know who I was. You know who I am now. I’m the guy who kissed a gay man’s wife.”

It has also been confirmed that Ant will be returning to Britain’s Got Talent next year alongside Declan Donnelly after taking time out following his drink drive arrest and stay in rehab earlier this year. He will begin filming auditions for the show in January.

A source close to the star told The Sun: “It’s been an incredibly difficult two-year period, but he has been entirely focused on turning his life around in order to return to work.”

The former couple are also said to be arguing over who will have their beloved dog Hurley on Christmas Day, with a source telling Heat magazine: “They’re on course to ruin one another’s Christmas, as they’ve been rowing over who gets to spend it with Hurley – there’s even talk that the pup will have to go between the two of them during the day.”