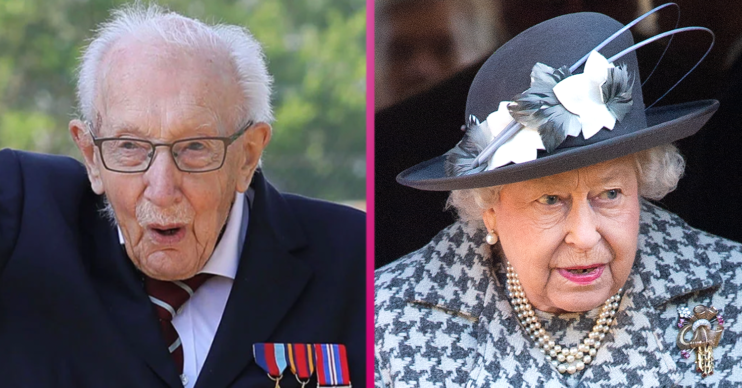 The fundraising superstar has been immortalised in stone.

War hero Colonel Tom Moore, 100, has had his very own sculpture unveiled just a day before he is set to be knighted by the Queen.

The bust shows Colonel Moore in his signature blazer and glasses.

Commissioned by Garry McBride, of Monumental Icons, he paid and helped create the bust himself.

He says he hopes it will be put on display at the NHS Charities Together headquarters.

Motivated by Tom Moore’s incredible NHS fundraising efforts, he says the commission gave him something worthwhile to do during lockdown.

He told the Daily Mail: “I was in a fortunate position, being in the monument and sculpture business, and my sculptor, Andy Edwards, he was locked down as well.

“So we found some clay, we worked on the photographs that were on Captain Sir Tom’s Facebook page and then we decided to make a bust.”

Colonel Tom raised a phenomenal £32 million for the NHS by walking laps of his Bedfordshire garden.

He initially set out to raise just £1,000 by walking 100 laps. However, as the money came flooding in, he simply kept on walking.

Gaining international attention, thousands donated from across the world to his JustGiving page.

He also gained recognition from the Queen, who sent him a congratulatory note on his 100th birthday.

She also made him an honorary Colonel on his birthday, as he had previously been a Captain during WWII.

In her birthday card she wrote: “I am so pleased to know you are celebrating your one hundredth birthday on 30 April 2020.

Read more: Matt Baker celebrates 16 years of marriage to ‘love of his life’

“I was also most interested to hear of your recent fundraising efforts for NHS Charities Together at this difficult time.

“I send my congratulations and best wishes to you on such a special occasion. Elizabeth.”

A message from Tom 'I could never have imagined this would happen to me. It is such a huge honour and I am very much looking forward to meeting Her Majesty The Queen. It is going to be the most special of days for me'#FridayWillBeAGoodDay pic.twitter.com/zha2bCIMzi

Meanwhile Prime Minister Boris Johnson praised him as a “beacon of light”.

He said: “Colonel Tom’s fantastic fundraising broke records, inspired the whole country and provided us all with a beacon of light through the fog of coronavirus.”

Captain Tom has shared his excitement over his upcoming meeting with The Queen.

He tweeted : “I could never have imagined this would happen to me. It is such a huge honour and I am very much looking forward to meeting Her Majesty The Queen. It is going to be the most special of days for me.”