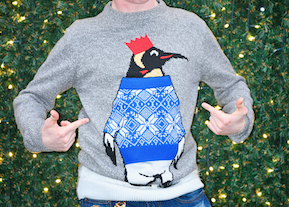 Children have been banned from wearing Christmas jumpers at a school non-uniform day if they haven’t made the right grades.

Furious parents say it is a humiliating “punishment” that shames those who’ve failed to reach the required standards.

The Bicester School told pupils that they had to achieve a certain number of Cs in its behavioural system or they couldn’t take part in today’s event, which is raising money for Save the Children.

Posting online, one mum said: “I agree with reward and consequence. I do not agree with making kids in effect wear a badge for the day announcing they didn’t make the grade.”

Another wrote: “It is a public declaration of which children have been singled out as not achieving enough,” the Oxford Mail reported.

A third added: “This is about raising money for charity, not punishing children. I do hope you are paying personally for every child you’re segregating so the charity does not lose out.”

The school in Oxfordshire insists that not wearing the uniform, for a £1 donation per pupil, is a “privilege” for those who have shown good behaviour and was not related to academic achievement.

Headteacher Tony Rushworth said the scheme aimed to motivate youngsters and that the school was always looking for fresh ways to encourage excellent attitudes to learning.

Read more: Why Iceland’s new Christmas advert has been banned

He said the non-uniform day was a “reward for exemplary effort and behaviour”.

“As this stage almost all of our students have shown an excellent attitude over the autumn term and have hit the challenging target we have set for them and will be in non-uniform on Friday,” Mr Rushworth added.

Is this an unfair punishment on kids or a good way to motivate good behaviour? Leave us a comment on our Facebook page @EntertainmentDailyFix and let us know what you think!