Scarlett Moffatt is one of the most loveable stars on our TVs - so it's hard to fathom why some people on the internet feel the need to attack her.

On Sunday evening the I'm A Celebrity winner made an emotional speech on Twitter, calling out hateful comments about her and admitting the trolls had "resulted in me crying my eyes out!" 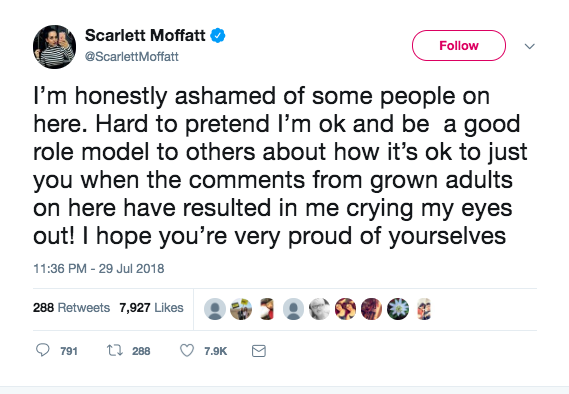 Speaking to her 659k followers, Scarlett, 27, wrote: "I’m honestly ashamed of some people on here. Hard to pretend I’m ok and be a good role model to others about how it’s ok to just [be] you, when the comments from grown adults on here have resulted in me crying my eyes out! I hope you’re very proud of yourselves."

The former Gogglebox star continued: "No wonder the amount of people including myself with social anxiety is increasing. Feel like I can’t even film tv shows without hating the way that I look after - from constantly being attacked because of my size and my appearance!" 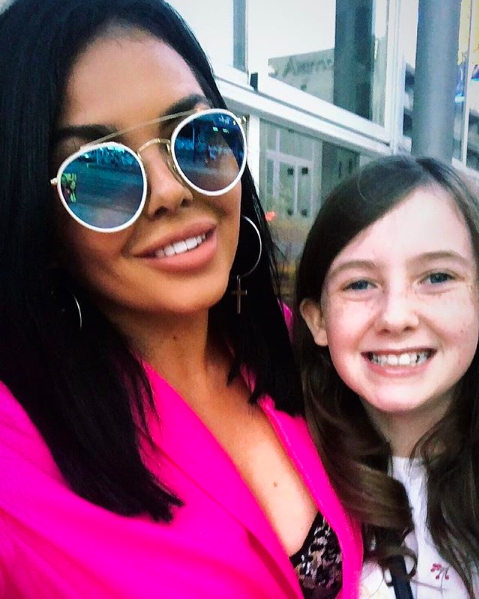 The reality star has spoken about wanting to be a role model for her little sister (credit: ScarlettMoffatt Instagram)

Scarlett, who has a 12-year-old sister, added: "Feel like I need to speak out for others!! This is not fair this needs to stop!! Please to the people out there who aren’t loving themselves right now please don’t let other people stop you from doing what you love. Real beauty shines from within ❤.

"I wanted and felt like I had to write that tweet to let you know at the end of the day I’m a 27 year old girl with feelings & a family who get upset also when they see vile comments about my appearance. Something needs to change within our society!!"

Fans rushed to send their love and sympathy to the honest star, including many in the public eye themselves. 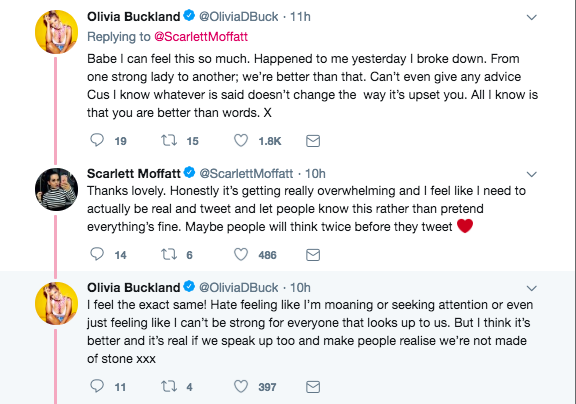 Love Island star Olivia Buckland wrote: "Babe I can feel this so much. Happened to me yesterday I broke down. From one strong lady to another; we’re better than that. Can’t even give any advice Cus I know whatever is said doesn’t change the way it’s upset you. All I know is that you are better than words. X".

Scarlett replied: "Thanks lovely. Honestly it’s getting really overwhelming and I feel like I need to actually be real and tweet and let people know this rather than pretend everything’s fine. Maybe people will think twice before they tweet ❤". 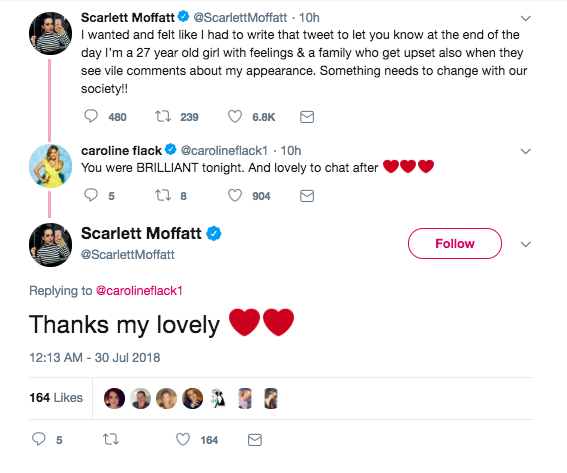 The Love Island presenter jumped in with some love, too (credit: Twitter)

I’m honestly ashamed of some people on here.

Iain Stirling, who is the voiceover of Love Island tweeted: "When I saw you today you looked 🔥🔥🔥🔥 and were (as ever) the sweetest most approachable individual out there! Sleep well knowing how little the trolls matter! YAS KWEEN (of the jungle)". 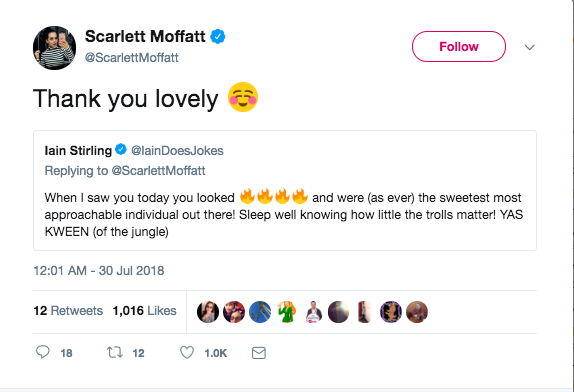 Scar thanks the voiceover star for his support (credit: Twitter)

While Caroline Flack replied: "You were BRILLIANT tonight. And lovely to chat after ❤❤❤".

The Twitter rant came after Scarlett made an appearance on Love Island spin-off show, Aftersun.

The Geordie star has dealt with more hate than most, but has never shied away from telling the idiots where to go. 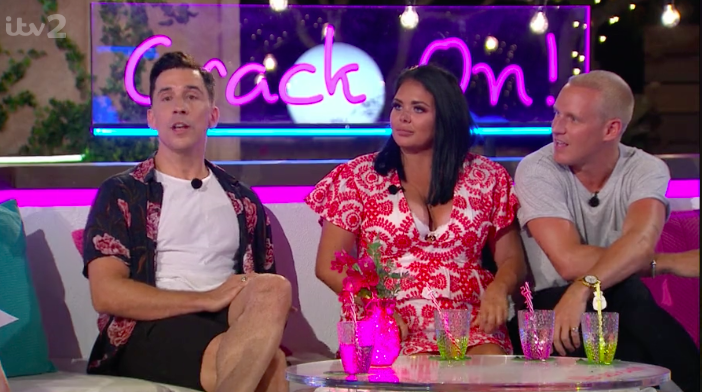 The jungle queen was on TV on Sunday night (credit: ITV2)

Just a few days ago on Instagram, the reality star posted a selfie with a Snapchat filter.

She wrote: "Got my love glasses on blocking out the haters 🤣 #sunshine #selfie #holiday".

Fans replied with support. One wrote: "People who troll are unhappy with themselves. You are a beautiful funny lovely woman.. ❤we need to celebrate our fellow women in life xx". 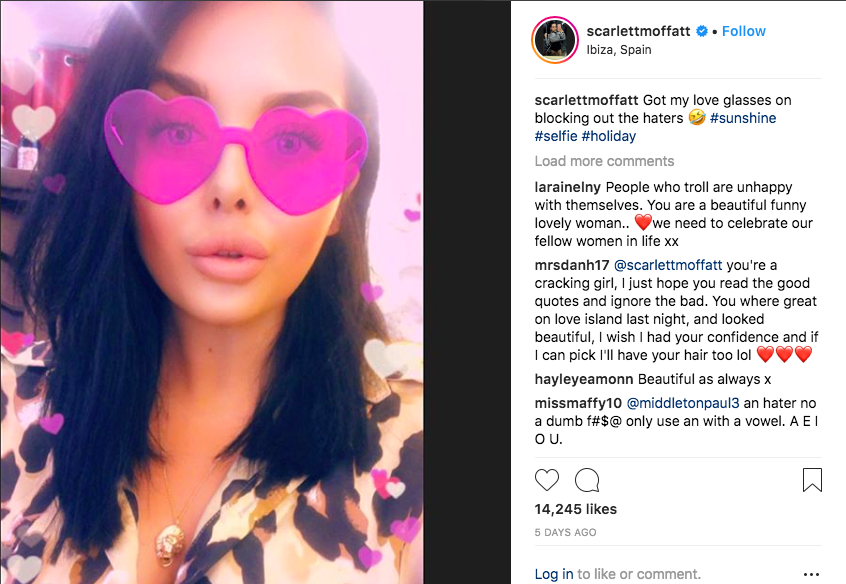 Scarlett tries not to let "haters" get to her (credit: ScarlettMoffatt Instagram)

Another added: "You're a cracking girl, I just hope you read the good quotes and ignore the bad. You were great on love island last night, and looked beautiful, I wish I had your confidence and if I can pick I'll have your hair too lol ❤❤❤".

We'll second that, Scarlett. You are absolutely lovely and brilliant. Keep calling out the trolls, and never ever change.

Do you think Scarlett is right to shame the trolls? Leave us a comment on our Facebook page @EntertainmentDailyFix and let us know what you think.