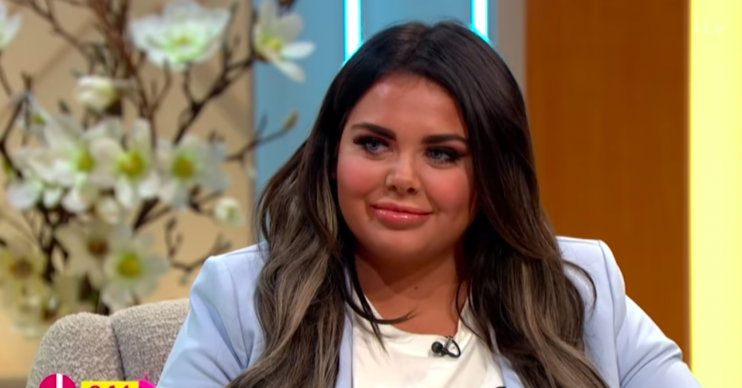 It’s been an awkward week for Scarlett Moffatt, who deleted her Twitter account and blocked Instagram profiles, after she was accused of being “rude and disrespectful” about a £150 skirt.

But now the Saturday Night Takeaway presenter has apologised to those involved, insisting the recent controversy is NOT why she’s deleted her Twitter page.

Over on Instagram Stories, the usually down-to-earth former Gogglebox star explained away the past few days of headlines, which saw a boutique owner accuse the I’m A Celeb winner of “ghosting” her after she begged for a tulle skirt to wear at Pride.

Scarlett, 28, wrote: “I’ve been super busy and intended to wear the @mysuitcaseboutique but instead will be returning the skirt. Also, I don’t Google my name, and knew none of this until today. Massive apologies to My Suitcase Boutique.

“Also I get so busy and bombarded with admin if anyone needs to message me just DM me. I’ll start and sort my messages and not be so [bleep] at admin.”

Blocking out the haters with my rainbow sparkle 🤣🏳️‍🌈 Living my best life this World Pride weekend in NYC thanks @gypsyblooduk for my amazing hat!! And to @virginholidays and @virginatlantic for bringing me and my friends to this amazing world pride #nyc #worldpride #lgbt #nycproud

But she denied the backlash was the reason she’d deleted her Twitter account, writing: “Also side note I haven’t used Twitter in 7 months apart from links to Insta. That’s why I deleted it, nothing to do with this incident.”

The owner of My Suitcase Boutique, Michaela Liu, also posted a response to Scarlett’s apology on Instagram, writing: “I have accepted Scarlett Moffatt’s apology and believe it is completely genuine, please can I ask that you stop with the trolling and the hate mail towards her.

“The post was never intended to cause any nastiness. It was purely an attempt to get a response from her.”

Hi everyone, any stock queries, please can you email, the link is in the bio. I am still trying get through all DMs, Thank you x

Michaela added: “Now that we have spoken we have agreed for the skirt to be sent back.”

Despite the apology, not many fans were feeling forgiving, with one tweeting: “I used to like her but a little bit of fame can change people.” Another added: “It’s always a mistake when celebs get caught out.” A third comment read: “She’s shown her true colours by the looks of it.”

💃🏽 feeling like a curvy Spanish señorita emoji! I think it’s important to have self love and honestly when I look in the mirror wearing this I love what I see, I’m not picking all the bits about myself I’m not keen on! and I don’t care if that sounds big headed 🤣 If you want to feel like an emoji to 💃🏽 click on the link in my bio for this £16 dress and more @peacocks_fashion muchas gracias ❤️🇪🇸 #love #spanish #emoji #spain #scarlettloves #mypeacocks #fashion #ootd

A few defended Scarlett, with one writing: “Don’t think she is the kind of girl to do anything intentionally nasty.” A second added: “She made a mistake and she has apologised now leave her alone.” One more blasted haters, saying: “Oh, leave our Scarlett alone, I think she’s lovely.”

Things seem to be otherwise great in the TV star’s life, and on Wednesday she took to Instagram to gush over her lovely boyfriend.

Beside a montage of pics, Scarlett wrote: “We keep our life quite private and he hates it when I post 🤣 but honestly I’ve never felt love like this ❤️ please never give up on finding your soul mate no matter how many bad experiences you have #love #boyfriend #happiness.”

We’re glad this has been resolved. When you’re as in-demand as our Scarlett, Instagram DMs do get buried!

What do you think of Scarlett’s explanation? Leave us a comment on our Facebook page @EntertainmentDailyFix and let us know what you think.