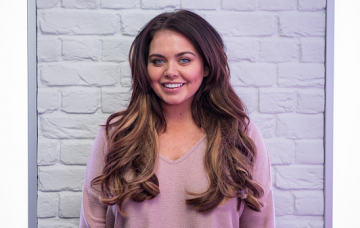 She has reportedly split with Lee Wilkinson

Saturday Night Takeaway star Scarlett Moffatt seems to be nursing her broken – or at least bruised – heart with good company and good drinks.

Scarlett recently left for Florida on what was reportedly supposed to be a romantic getaway with her ex, Lee Wilkinson.

But, after apparently splitting with her man, Scarlett took a friend instead – and the two seem to be having a great time.

Scarlett posted a shot to Instagram, showing off her sleek, leopard print look, alongside a shot of her with her friend – who performs as drag queen Emma Royd – ready to go out.

The Sun reports that Scarlett transferred Lee’s ticket after dumping him over rumoured infidelities, with their source claiming she was determined to move on quickly.

“She’s been so excited about this break with him. But she won’t let it hang over her now he’s gone,” the source said.

“Scarlett got straight on the phone to a mate and now they’re going together instead. She’s surrounded herself with her friends and family and is keeping a brave face on.”

This comes after Scarlett posted a video to Instagram stories at the end of last week, which appeared to indicate all was not well in her love life.

Where are you planning a holiday this summer? Visit our Facebook page @EntertainmentDailyFix and let us know!