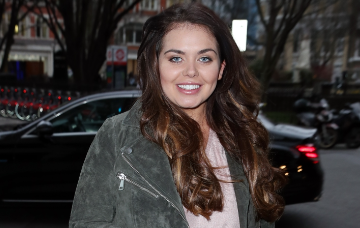 She defended the nose she was born with on Twitter

Scarlett Moffatt has taken to Twitter to slam reports she’s had plastic surgery.

The former I’m A Celeb champ felt she had to respond following articles in magazines and online news sites which alleged she’s had a nose job.

Some of the reports even got plastic surgeons to comment on work the 27-year-old could have had done based on pictures of her today compared to when she first found fame on Gogglebox five years ago.

Scarlett, who has spoken in the past about having lip fillers and teeth veneers, said she has never been under the knife and she’s concerned about the impact such allegations could have on her young fans.

She wrote: “Can I just say I have not had surgery so for the rhinoplasty surgeons who is an expert …. erm basically mate you’re not an expert. I have had veneers since I was 19 I just now have good ones – also if you show a pic of anyone 10 years ago they’re gonna look different.”

She added alongside a picture of herself as school girl which she previously shared with her Instagram followers: “I have never ever had a nose job so to the hurtful ‘experts’ saying I’ve gone too far… thanks for slating the nose I was born with! Stop all this it’s not good for mine or any other young woman’s confidence reading it!!”

Her good friend and Love Island star Kem Cetinay replied to tell her: “Just ignore them! You look lovely xx”

She replied to him: “I know I do ha, but I don’t want young girls to look at before and after pics and think that surgery is the only option. These magazines aren’t good for girls mental health. Xx” 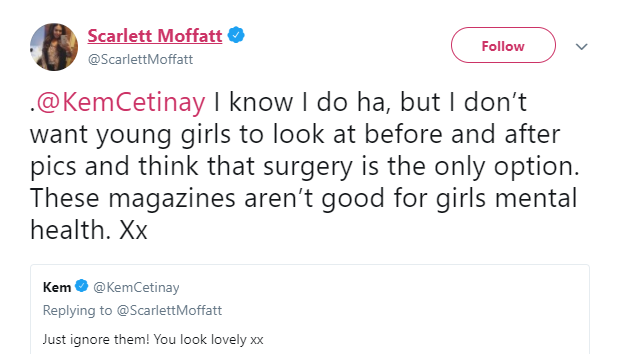 She finished by tweeting to reassure her fans: “Please don’t think this stuff bothers me my lovelies it doesn’t I just genuinely worry about the impact these surgery stories have on young women who are looking at before and after pics. Please love the skin your in.” [sic]

Scarlett is currently preparing for Ant and Dec’s Saturday Night Takeaway this weekend, where she’s expected to take on a larger role in Ant’s absence.

Declan Donnelly will present solo for the first time as his partner has returned to rehab after being arrested on suspicion of drink driving.

Read more: Ashley Banjo praises Arg’s courage after they strip off for The Real Full Monty

Scarlett and Stephen Mulhern are tipped to step in when Dec needs support – for example to speak to a member in the audience while he remains on stage.

They are also set to join him in Orlando next weekend for the series finale which will be filmed at Universal Studios, Florida.

What do you think of Scarlett’s comments? Leave us a comment on our Facebook page @EntertainmentDailyFix and let us know!