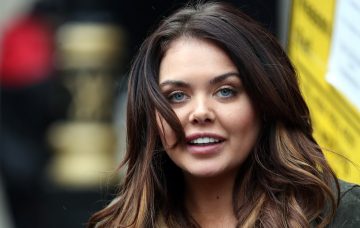 Former Gogglebox star has been having fun in Florida with friends

It seems Scarlett Moffatt has discovered the best treatment for a broken heart – an amazing holiday with a friend.

The I’m A Celeb winner jetted off to Florida last week after hinting she’d split from boyfriend Lee Wilkinson.

It was rumoured the holiday was meant to be for her and her ex, but she switched the tickets after calling time on their five-month romance.

On her Facebook page last week, she suggested it was all over between her and the fitness model by saying she had a knack for picking the wrong man, although neither Scarlett nor Lee has officially confirmed a break up.

But Scarlett’s troubles seemed far behind her during her time in the sun, where she shared pictures with her Instagram followers of her sipping ice cold drinks by the pool with her pal.

She’s also shared images of them enjoying the many theme parks in Orlando, including pics of her and her friend on rollercoasters and on a water raft ride.

“My rollercoaster face is the same face as when I’m at a party and the DJ says the buffets open. I don’t wanna leave,” she said of one picture of them on a ride.

During the trip, they also enjoyed seeing a production of the Jersey Boys and swimming with dolphins at Discovery Cove.

At the aquatic park, the former Gogglebox star also met a brightly coloured bird who sat on her shoulder.

Scarlett, 28, joked of the image: “When you both show up with a red headband on,” as her headpiece matched the bird’s feathers.

She added: “Honestly, when I visit Florida I feel like a kid at Xmas, favourite place in the world!! Smiley Scarlett.”

But all good things must come to an end, and Scarlett was gutted when the trip was over.

“Loving life!! Can’t believe we go home tomorrow!! Florida you are unreal,” she wrote in the final snap she shared before they flew home.

The Sun claimed that Scarlett transferred Lee’s ticket after they allegedly broke up.

“She’s been so excited about this break with him. But she won’t let it hang over her now he’s gone,” the source said.

“Scarlett got straight on the phone to a mate and now they’re going together instead. She’s surrounded herself with her friends and family and is keeping a brave face on.”

This comes after Scarlett posted videos and comments to Instagram stories and Facebook at the end of last week, which appeared to indicate all was not well in her love life.

It’s not the first time Scarlett has been to Florida this year. She also flew to the sunny US state in March for the series finale of Ant and Dec’s Saturday Night Take Away.

She took a more prominent role supporting Declan Donnelly on the show, along with Stephen Mulhern, in the absence of Ant McPartlin.

What do you think of Scarlett’s trip to Florida? Leave us a comment on our Facebook page @EntertainmentDailyFix and let us know!