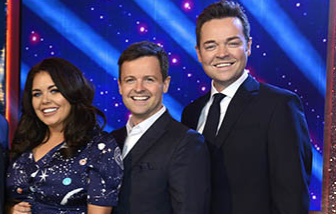 The show broadcasts live from Universal Orlando Resort on Saturday

A nine-year-old who has spent her whole life in and out of hospital is among 300 passengers heading to Orlando for the finale of Ant and Dec’s Saturday Night Takeaway.

The ITV show’s final episode will be presented from the US solely by Declan Donnelly after Ant McPartlin, his presenting partner of 29 years, stepped away from his TV commitments.

Each week throughout the series, hundreds of lucky viewers have been surprised with tickets to Orlando, Florida, in a plane specifically chartered by Virgin Holidays for the airing of the episode.

The programme’s support presenters Scarlett Moffatt and Stephen Mulhern joined the passengers as the plane departed from Gatwick Airport on Tuesday afternoon.

Some of those onboard include nine-year-old Angel Sutton from Scarborough, who was born with a leg abnormality due to a genetic condition, and Sofia Faal, eight, who decided to give her pocket money to the homeless.

Mason Ringer, 12, was surprised with the treat after he saved his mother’s life by calling an ambulance while Ben Parry, eight, survived a brain tumour.

Joe Thompson, managing director of Virgin Holidays, said: “We’ve had hundreds of thousands of families enter the competition to win a place on the plane, but unfortunately we only have space for a lucky few.

“We’re really excited about giving these deserving winners the holiday of a lifetime, and can’t wait to see the live television spectacle ITV have planned for April 7.”

This weekend’s entire episode will be filmed live at Universal Orlando Resort and presented by Dec one week after he made his debut as a solo presenter.

Last Saturday’s broadcast was labelled a success as Dec oversaw an almost seamless live 90-minute programme, with his only mishap dropping a carton of popcorn.

Dec later tweeted: “Thanks for all your lovely messages tonight, they are VERY much appreciated, I’m glad you enjoyed the show. I didn’t sleep an awful lot last night so I’m off to bed! Night y’all. D x.”

Ant stepped down from his presenting commitments when he was charged with drink-driving in March.

The TV presenter was due to appear at Wimbledon Magistrates’ Court on Wednesday charged with the offence.

But the hearing was adjourned to April 16, a spokeswoman for the court said.

Ant was charged by postal requisition on March 21 after allegedly being involved in a collision with two other cars while he was driving his Mini in Richmond, west London, on March 18.