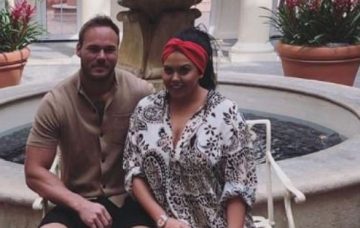 She needs her sleep as she's taking on the Great North Run!

Scarlett Moffatt is no doubt feeling a little bit sleep-deprived this morning after being kept awake all night.

The Saturday Night Takeaway star, 27, took to Instagram Stories on Tuesday evening to reveal her boyfriend Lee Wilkinson was blocking her attempt to get some shut-eye… by snoring!

In a scene no doubt familiar to many of us, the ex Queen of the Jungle expressed her annoyance by uploading a clip of a darkened bedroom, the sounds of loud snoring clearly audible.

She added the caption: “The struggle is real… snoring hell.”

We’re sure MANY can relate!

So far, fitness model Lee has yet to respond to Scarlett’s cheeky message!

Scarlett was likely desperate to sleep as well, after starting a gruelling training regime on Tuesday, ahead of the Great North Run.

The former Gogglebox favourite shared a photo to Instagram Stories on Tuesday afternoon after completing her first training session.

And with her thumbs up pose, we’re guessing it went well! 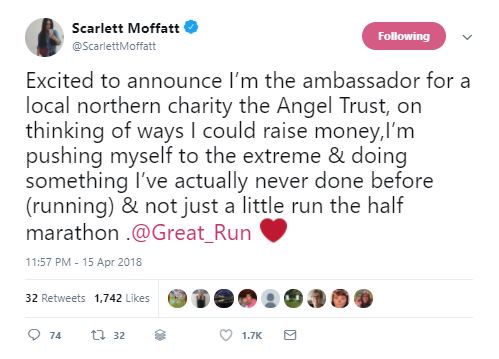 Scarlett is running in aid of a local charity, telling fans: “Excited to announce I’m the ambassador for a local northern charity the Angel Trust, on thinking of ways I could raise money, I’m pushing myself to the extreme & doing something I’ve actually never done before (running) & not just a little run the half marathon.”

The star has asked fans for advice, with many getting touch to share their own tips and experiences.

Many told Scarlett to use an app to track her progress, while others told her not to be disheartened if she hits a tough patch.

Some also advised she join a local running club and meet up with others to keep her motivated.

Other suggestions including listening to a podcast or good music while running, focus on getting into a good mindset, and to ensure she has a realistic programme to follow that fits in with her lifestyle.

It’s been a busy few weeks for Scarlett.

She’s just wrapped filming on the last series of Saturday Night Takeaway, which included jetting over to Orlando, Florida for the grand finale. Lucky girl!

Good luck in the run, Scarlett!

Are you taking on any marathons or half marathons this year? Leave us a comment on our Facebook page @EntertainmentDailyFix and let us know what you think!