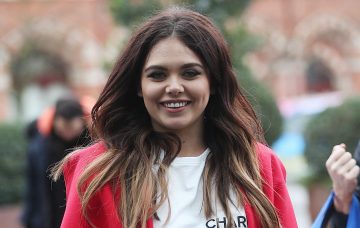 Just when you think presenter Scarlett Moffatt can’t get any more relatable, she reveals that she’s failed her driving test “too many times”.

Speaking in a new interview ahead of her return to TV screens next week, on Saturday Night Takeaway, the 27-year-old star was asked if she had any unfulfilled ambitions.

She admitted: “The only thing I can never get my hands on is a driving licence, I’ve failed my driving test too many times, [more] than I care to think about.”

Scarlett, who won I’m A Celebrity… Get Me Out of Here! and was the break-out star of reality show Gogglebox, went on to reveal that she still gets nervous ahead of live TV.

She said: “I think nerves are good, it means you want to do well and want it to be a good show so long may the nerves continue!

“I don’t have a pre show ritual but I do always bring along my little Noddy toy to all my shows – sort of like a good luck charm. I’ve had him since my third birthday.”

The hilarious TV star also revealed her most ‘pinch yourself’ moment from the last series of the show, which also stars Ant McPartlin, Declan Donnelly, and Stephen Mulhern.

She said: “Honestly, walking into the first ever script meeting and realising ‘wow I’m a part of Ant and Dec’s Saturday Night Takeaway… just casually sat having a cup of tea with the most amazing people at ITV, discussing the script.”

Scarlett, from County Durham, added that her co-stars are “like the brothers I never had. They’re genuinely lovely, down to earth people who offer me a lot of brilliant career advice.”

The new series is set to kick off with a killer opening show.

Singer Kylie Minogue is performing her new single, as well as a few of those old hits. Olly Murs is due to take the reigns as Guest Announcer, while Ant & Dec take on a daredevil Monster Truck challenge.

Meanwhile, Scarlett will be out in a mystery location looking to fill the front row of the studio audience.

The star of Streetmate also revealed that if she were still on Gogglebox, she wouldn’t be very kind about her own presenting skills.

She admitted: “Wow, now, I’m brutally honest, as you know. So I’d probably say ‘her squeaky voice does my head in’!”

Read more: Scarlett Moffatt hints that things are getting serious with her new boyfriend

It’s been a great month for Scarlett, who revealed this month that she has a hot new boyfriend.

The Geordie star and fitness model Lee Wilkinson confirmed they were an item on Valentine’s Day when she took to Instagram Stories to post a series of snaps of Lee, calling herself his “girlfriend”.

And the relationship is apparently going from strength to strength after the former Jungle Queen posted another string of photos on Stories this weekend, including one at her parents’ house!

How many tries did you take with your driving test? Leave us a comment on our Facebook page @EntertainmentDailyFix and let us know what you think!