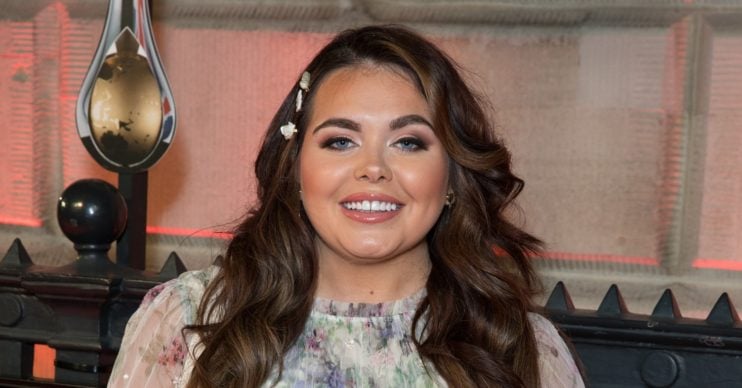 The Love Island host took her own life in February

The 29-year-old admitted she finds comfort in reaching out to her friend by sending love heart emojis when she misses her.

It comes months after Caroline took her own life in February aged 40.

Speaking on the How To Fail podcast, Scarlett said: ”I messaged Caroline, just checking, saying ‘hope you’re alright’ and things.

”Weirdly now I still even sort of send love heart emojis to her.

”I know that now because of the current situation with the horrific coronavirus, the Be Kind campaign has gone a little bit quiet.

“But I would like to think that when life goes back to normality people really choose their words wisely and don’t just jump on a bandwagon.”

The former I’m A Celeb winner went on to talk about the negative effects of social media – and the hurt that nasty comments can cause.

Weirdly now I still even sort of send love heart emojis to her.

She added: ”I feel that social media allows people to voice opinions and I just think that’s fine we’re all entitled to opinions.

”But I think if it’s a negative one and it really affects someone you don’t have to put it out there.”

Caroline was accused of hitting her boyfriend Lewis Burton, 27, over the head with a lamp at her London home – charges which the pair both denied.

She took her own life on February 15, hours after learning lawyers were going ahead with assault charges.

Alongside a snap of the two together, she wrote: “Sending all my love to everyone who loves you Flacky and there are so many who do ❤️ my heart is breaking, truly breaking 💔.

“I hope the press give your family the peace they deserve at this time ❤️.”

Scarlett has certainly dealt with her fair share of negative comments in the past.

Earlier this year, the former Gogglebox star revealed that the trolling she received got so bad she used to call the Samaritans.

The cruel jibes would range from Scarlett’s nose to her figure – leaving the presenter feeling distraught.

Speaking to Kate Thornton as part of her White Wine, Question Time podcast, Scarlett said: “I was getting loads of stick.

She added: “Can you imagine working any other job and getting this much hate?”

On calling the Samaritans, she said: “I’d give a fake name and I’d chat for 15 minutes. It actually really, really helped.”

Scarlett now has a way to deal with any trolls who send her negative comments or abuse. She sends them the number for the Samaritans and asks if they are okay.

“I think ‘God, how must they be feeling to have so much hatred towards someone they have never met?’,” she explained.

“99% of the time they apologise and say they just wanted a reaction. Or say themselves they’ve had a crap day.”