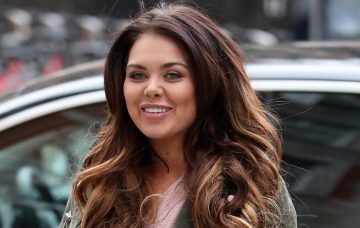 She revealed details on her Heart FM radio show

Scarlett Moffatt has revealed a last-minute mishap ahead of her Saturday Night Takeaway trip to Florida – her boyfriend left his passport at home!

The former I’m A Celebrity winner is jetting over to Orlando this week to film the ITV show’s huge finale, which broadcasts live from Universal Orlando Resort on Saturday evening.

And she’s being accompanied on the work trip by boyfriend Lee Wilkinson.

Er, if he can get his passport in time, that is!

While hosting her own Heart FM radio show on Easter Monday, Scarlett revealed: “I’m going to be honest with you. Today wasn’t quite as relaxing as I’d hoped it would be.

“I thought I’d be chilling, eating Mini Eggs, but I’m off to Florida tomorrow for Saturday Night Takeaway, for the finale, and my boyfriend has gone and left something vital at home – his passport! No stress at all!”

Scarlett, 27, also revealed her boyfriend’s passport error on Instagram, teasing him on camera about the fact he was in London while his passport was presumably back home in Newcastle.

She told fans: “So we fly to Florida tomorrow and what is the one thing you’ve forgot? What have you forgot?”

The star then swung the camera around to capture Lee looking a bit embarrassed, as she continued: “Tell everyone what you forgot!

Oops! But it happens to the best of us!

Thankfully, Lee did get his hands on his passport on time, as Scarlett and Lee both shared an update to Instagram Stories on Tuesday morning, showing them at the airport ready to catch their flight.

This weekend’s Saturday Night Takeaway is the finale for the current series.

Once again, Declan Donnelly will be hosting solo, while telly partner Ant McPartlin returns to rehab and steps down from current TV commitments after a drink-drive charge.

The programme was cancelled two weekends ago in light of Ant’s arrest, but returned to screens on March 31 with Dec hosting alone.

The show’s highest audience share before Saturday night was on February 24, when it pulled in 37%.

Overnight figures include those watching on ITV +1.

Did you watch Dec presenting solo? How do you think he did? Leave us a comment on our Facebook page @EntertainmentDailyFix and let us know what you think!