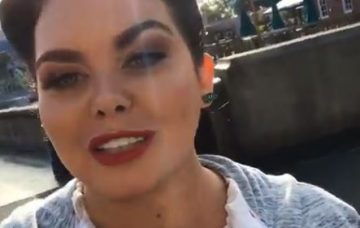 She's up for a laugh!

Scarlett Moffatt has only just landed in Florida for this weekend’s Saturday Night Takeaway finale, but already she’s been put to the test!

The former Gogglebox star was up bright and early on Wednesday to complete a series of dares at Universal Orlando Resort, sent in by Saturday Night Takeaway viewers.

As part of the show’s Theme Park Bingo Challenges game on Twitter, fans sent in a variety of dares for Scarlett, 27, to complete over in Florida.

And, showing she’s up for a laugh, the former Queen of the Jungle went along with it!

One fan dare urged her to become Harry Potter… which was achieved after a trip to The Wizarding World of Harry Potter. She’s a Gryffindor, FYI!

The next challenge was to convince a stranger to hold her hand on a kids’ theme park ride.

No problem! She went up to the first person she saw and said: “Excuse me, I’m not a weirdo. I’m Scarlett. I’m really scared of this ride. Do you mind coming on with us to hold my hand?”

Other challenges including dancing with a Transformer – achieved, easily! – while another made her go up to a stranger and shout out the Saturday Night Takeaway catchphrase, “Don’t just watch the adverts…”

She did that but the poor man she approached had no idea what she was talking about and didn’t respond with the usual, “win them!” He did laugh, though!

We think she did pretty well, right?

Scarlett jetted over to Orlando on Tuesday with Saturday Night Takeaway co-star Stephen Mulhern and a plane full of lucky Takeaway competition winners.

The show will air its series finale live from Universal Orlando Resort this Saturday.

Declan Donnelly will once again host the show solo, after telly partner Ant McPartlin stepped down from current TV work.

Dec won’t be entirely alone, however, as along with Scarlett and Stephen helping out, he’ll be joined by Hollywood actress Denise Richards.

The former Bond Girl has been confirmed as the Special Guest Announcer for the finale.